With no obvious goalscorer, Ireland will stand or fall on their defence 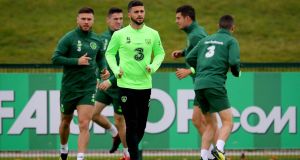 Shane Long at Republic of Ireland squad training in Dublin. Long will be looking for his first goal for Ireland in two years. Photograph: Ryan Byrne/Inpho

It clearly says something about the state of Martin O’Neill’s striking options that the Republic of Ireland manager has been asked more than once by the media over the past few months about the prospect of giving Troy Parrott a senior call-up.

Nobody was suggesting that a 16-year-old who has not been anywhere near Tottenham’s first team should be starting for the Irish senior side. But after he impressed at the Under-17 European Championships back in May, there has seemed at times to be a hint of impatience amongst some of the press over the progress of a player who might be regarded as the country’s brightest striking prospect since Robbie Keane 20 years ago.

Keane completely ripped the senior team’s previous goalscoring records apart, and so it is no great wonder that O’Neill name-checks him on a pretty regular basis. “My issues up front have been the same as they have been for five years,” he said on Monday, for instance. “Honestly. We had, as we said, a rather older Robbie Keane and at this minute no one has proved themselves to be a natural goalscorer.”

In seven of the last 10 qualifying campaigns, Ireland have conceded less than a goal a game

The Danes, sure enough, are unlikely to be unduly intimidated by O’Neill’s options ahead of Saturday evening’s game. Ireland’s one Premier League option, Shane Long, assuming he is fit, will be looking for his first goal for Ireland in two years (he will, at least, be relieved that his last goal for Southampton is not so long ago that people are totting up the endless minutes that have passed again) while Sean Maguire has played next to no football of late due to an injury, and Aston Villa’s Scott Hogan has not kicked a ball in anger since the summer.

Aiden O’Brien did well on his debut in Poland, scoring and looking generally busy, while Callum Robinson has hit a healthy bit of form for his club, Preston, in the weeks since. Four in seven in the Championship is not to be sniffed at, and yet the step up to international level is substantial, so nobody is likely to be getting too carried away.

For all of that, though, the team’s recent history actually suggests that Ireland’s competitive prospects are far more closely tied to how well they defend than how many goals they score.

In seven of the last 10 qualifying campaigns, Ireland have conceded less than a goal a game. In five of those instances, that has provided the basis for a second-placed finish which generally, as it will again next year, provides a ticket to either the play-offs or the finals.

To qualify for Euro 2016 in France, the third place achieved was good enough for the play-offs. The only occasion in recent history, in fact, when the team didn’t at least stay in the hunt for a place at a championship after keeping things tight at the back was in the World Cup campaign of 2006.

Only five sides in the entirety of that qualification campaign conceded fewer than Ireland’s five goals, and all progressed. Of those who failed to make the cut, Scotland, who finished third in Group Five, came closest to matching it, having let in seven over the course of their 10 group games.

Brian Kerr’s team actually finished fourth but would, theoretically at least, have won the group had they not surrendered two leads against an average-looking Israel side. Almost incredibly, three of the five they conceded were in those games, while eight of the 12 they scored came against Cyprus and the Faroe Islands.

Remove the minnows from the equation in those 10 qualifying campaigns, indeed, and Ireland’s return in front of goal has been strikingly similar since 2002. On the way to Japan and South Korea, Ireland scored so many goals, 23 of them, that even when you exclude sixth-placed Andorra, they averaged more than two a game.

Irish teams have never come close to equalling that achievement in the intervening years, and when you exclude the sides that finished last in their various groups, they average almost exactly one per outing regardless of where they ultimately finished and whether they qualified or not. The free-scoring high point over the last 16 years was – wait for it – under Giovanni Trapattoni on the way to the 2012 Euros when his side averaged 1.25 goals in the eight games played against the four other sides to finish in the top five.

Last time around, the corresponding figure was 0.875, significantly but not hugely down on the 1.0 they averaged in five of the eight campaigns.

Keane was well gone by then, and his loss has been felt, although the scale of the impact remains a little difficult to quantify.

The Dubliner played a part in nine of those 10 campaigns, and during that time scored just over 25 per cent of Ireland’s qualifying group goals and a fifth of those managed against the “better” sides. There were a few other factors at play, though, with his status as the side’s penalty-taker helping, for instance, and just one of the 11 goals he scored in his last two campaigns was from play against a top-five side.

Not having a natural successor is clearly a concern for O’Neill, though, and unless somebody suddenly steps up to the plate, there is no obvious reason to anticipate things getting better in the immediate future. Keane, as it happens, was only six months older than Parrott is now when he started playing first-team football for Wolves, but the Tottenham teenager is, for all his promise, a distance off that as things stand.

The more pressing danger for O’Neill is that things continue to slip on the defensive side of things, which is how it has tended to fall apart for most of his predecessors.

Mick McCarthy departed just two games into the Euro 2004 campaign with his side having already conceded six times. Trapattoni tightened things considerably after Steve Staunton’s brief reign but then departed himself towards the end of his third campaign during which the early 1-6 home defeat by Germany had fatally undermined his claim that, whatever else, Ireland were well organised at the back. That one game also did much to drag his 0.75 average goals conceded against top five sides figure down to 2.0.

O’Neill had successfully addressed defensive issues so that a goal a game against what might be described as Ireland’s group rivals was, once again, enough for the team to earn a play-off place. Then the second leg against Denmark happened.

It need not prove fatal for him, although there is a sense that, like that defeat by Germany under Trapattoni, its memory will linger and return to haunt the manager whenever things go wrong – as they did again, rather spectacularly, in Cardiff.

All of which may be just a very long-winded way of making the most obvious point ever made in a national newspaper about an international manager. That whatever about uncovering a new source of goals, as he repeatedly says he wants to, O’Neill’s more pressing need is for his side to stop conceding them, because Ireland are not a team that can count on outscoring opponents of any real quality in high-scoring games.

It’s close the floodgates, then, or hope the FAI doesn’t look to someone else who persuades them he has the organisational skills to achieve the defensive base required for a team that doesn’t score much to succeed.

And if you’re thinking you’ve heard all that before, it is, of course, because you have.

1 Diego Maradona dies of heart attack, aged 60
2 Keith Duggan: Through the glories and the disgraces, we were all Maradona addicts
3 Darragh Ó Sé: Cork and Donegal went out with the wrong attitude
4 Gordon D'Arcy: I know what Joe and Cheika would do. Fix the basics
5 Handful of God: Five magic Maradona moments
Real news has value SUBSCRIBE
Crossword Get access to over 6,000 interactive crosswords