Petkovic confident Switzerland can thrive despite absence of Shaqiri 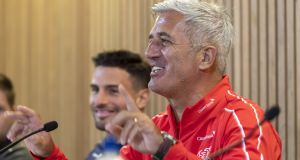 Switzerland’s head coach Vladimir Petkovic at a press conference at the Aviva stadium ahead of Thursday’s Euro 2020 qualifier against the Republic of Ireland. Photograph: Georgios Kefalas/EPA

Switzerland boss Vladimir Petkovic has warned the Republic of Ireland it would be a mistake to read too much into Xherdan Shaqiri’s absence from Dublin on Thursday night.

The Liverpool playmaker’s decision to make himself unavailable for the Euro 2020 Group D qualifier at the Aviva Stadium has deprived the manager of one of his most creative talents.

However, he is not the only man missing – Josip Drmic, Timm Klose, Djibril Sow and Steven Zuber are also out – and Petkovic is confident on the basis of past experience that the Swiss can still prosper without them.

He said: “It’s not only Shaqiri missing, there are also other players, like Zuber, like Drmic, who are not here. But we have shown in the past that we can handle that and win without important players.

“We have a style of play which doesn’t depend on one single player. We have shown the past several times that we can replace missing players.

“There is no anxiety because Shaqiri is missing. We are used to replacing missing players, even Shaqiri.”

Nor is skipper Granit Xhaka too concerned by the absentees as he and his team-mates attempt to close a six-point gap on Group D leaders Ireland, who have played two games more.

Xhaka said: “These players are missing, but we have other players who can compensate for their absence. We know we can win games without these players.

“This Irish team is physically quite strong, but we will find a solution to combat that.”

Switzerland, who currently sit 11th in the Fifa world rankings, launched their campaign with a 2-0 win in Georgia in March, but surrendered a 3-0 lead in a madcap conclusion to their home clash with Denmark three days later to draw 3-3.

In the circumstances, the trip to Ireland is increasingly significant, although Petkovic knows it will not determine his side’s fate whatever happens.

He said: “Since the draw, we have known that this was one of the key games in this qualification, but it won’t be decisive.

“We want to take all three points because the table will look a little bit better afterwards.”

Fabian Schar could have been forgiven for hoping his presence in the national squad might bring a little respite from a turbulent few weeks at club Newcastle, although the defender, who scored the Magpies’ equaliser in Saturday’s 1-1 Premier League draw with Watford, is relishing the high stakes with both club and country.

Schar said: “It’s like always – I’m really happy to be here with the national team. The start of the season has been quite hard for us at Newcastle, but also with a few good results in the last two weeks.

“But like always, I’m happy to be at Newcastle and always happy to come to the national team.”