Mick McCarthy: I can build the Ireland team around Declan Rice 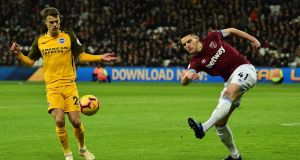 Mick McCarthy has reiterated his belief that Declan Rice is a player he could build his Ireland team around over the coming couple of years and expressed the hope that the 19-year-old might feel more comfortable resolving his international future now that his club one has been sorted out.

“There was a real issue with his (West Ham) contract and they got that sorted out now, so I guess he’s got his head clear on that and he can make his mind up,” said the Ireland manager on Talksport radio ,although he was quick to insist that there is no immediate pressure on the teenager to announce his decision.

“There’s a lot going on for the young man,” he said. “We say, ‘oh they should be able to makes their minds up’, but he’s a young fella and he’s only just got into the West Ham team.

“I remember saying when I was doing some stuff with Ireland, ‘look, let him get into the West Ham team, let him settle, let him be a first team player and then he’ll make his mind up’.

“I’m still of the same opinion. If he wants to play for me I’ll be delighted, and I’ll be picking him, but I’ve left it with him. I can’t do anymore.

“My job is to pick him if he decides to play for us, and I hope he does because he’s an excellent player. He’s a player I can build a team around.”

McCarthy recently said that his only real deadline for a decision would be March when the start of Ireland’s European Championship qualification campaign gets under way, but there had been a good deal of confidence within the FAI before Christmas that the saga might be resolved more quickly than that.

The manager has declined to make any predictions about what Rice will do despite having what has generally been reported to have been a very positive meeting with the young midfielder in December.