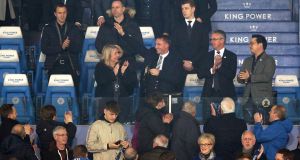 New Leicester City manager Brendan Rodgers arrives in the stands after being unveiled ahead of the Premier League match against Brighton at the King Power stadium. Photograph: Nigel French/PA Wire

With the Claude Puel cloud lifted, here comes Brendan Rodgers’s reign. Leicester’s new manager ran the rule over his charges as they claimed their first home win since St Stephen’s Day, thanks to goals by Demarai Gray and Jamie Vardy.

Davy Pröpper pulled one back but it was not enough for Brighton, for whom relegation worries are mounting. If Leicester are looking up again, Brighton cannot be comfortable about being only three points above 18th place Southampton.

Hours after signing a contract until 2022, Rodgers watched from the directors’ box. The 46-year-old beamed and waved when he was given a rapturous greeting from the home fans.

With Rodgers not starting work until after this match, Leicester were selected by a pair of first-team coaches, Adam Sadler and Mike Stowell. The latter was no newcomer to the role, this being the fifth time in 14 years at Leicester that he has been asked to assume caretaker duties. He and Sadler made only two alterations to the line-up who started Puel’s last match but hoped for a very different outcome to Saturday’s 4-1 home defeat by Crystal Palace. Ben Chilwell returned as left back in place of Christian Fuchs, while Gray began on the right wing instead of Rachid Ghezzal.

Having spoken of his desire to create a “really aggressive” side, Rodgers must have been impressed by the way Leicester got stuck in. Then again, they could hardly have asked for more obliging visitors than Brighton, who began with a timidity that showed why they are among the Premier League’s worst travellers, without an away win since a narrow victory at Huddersfield in early December.

Scoring the opening goal, which Leicester repeatedly failed to do under Puel, would have been a dandy way to signal a new dawn. Vardy, one of the player’s hoping to benefit most from Puel’s departure, had a chance when James Maddison pulled the ball back to him but Shane Duffy threw himself in front of the striker’s shot from the edge of the six-yard box.

Leicester were not denied, merely delayed, and they made the breakthrough thanks to Gray. Chris Hughton must have been aghast at how feebly his team defended after Harvey Barnes dispossessed Anthony Knockaert near halfway. Youri Tielemans ran free from midfield before slipping a pass through to Gray, who was free to fire low into the net from 15 yards. He nearly doubled his tally after Barnes again made gains down the left but Mat Ryan got down well to save.

Brighton’s first chance came from a predictable source, Duffy heading over the bar from a corner. Brighton grew into the game , although Gaëtan Bong had to clear from in front of his own goal after Barnes concluded another burst with a dangerous cross.

When a long-shot by Pascal Gross took a nick off Harry Maguire, Kasper Schmeichel reacted sharply to tip the ball over the bar. The goalkeeper then made an outstanding save, diving to his left and showing a strong hand to swat away a fierce low shot by Knockaert after Bong beat Barnes down the left wing.

Leicester had begun strongly but became dishevelled. They should have been punished early in the second half when Maddison was caught in possession but, after a lovely move involving Knockaert and a backheeled pass by Gross, Murray lifted the ball over the goal from eight yards. Worse, Gross suffered an injury when performing his nifty tee-up. His replacement, Yves Bissouma, soon went close with a shot from 20 yards that whizzed inches wide.

Moments later Leicester eased their anxiety with a classy goal. Advancing nimbly from midfield they cut through Brighton, Vardy applying the finish by running on to a clever pass by Maddison and ramming the ball past Ryan from 10 yards.

Leicester were not comfortable for long. Three minutes later Pröpper slashed their lead, firing low into the net from edge of the box after Knockaert’s cross from the right was deflected into his path by Chilwell.