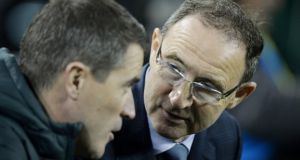 Martin O’Neill: “I am looking forward to meeting up with the squad in two weeks-time and preparing for two very important matches.”

Republic of Ireland manager Martin O’Neill has named a 37-man provisional squad for next month’s Euro 2016 qualification matches against Gibraltar and Germany.

There were no surprises in a squad that will be cut closer to the games. Rotherham midfielder Paul Green returns after injury, while Joey O’Brien misses out with the knee problem that forced him to withdraw after he was called up for the games against Oman and Georgia.

There’s no Mark Noble on the list either, O’Brien’s West Ham teammate, who qualifies to play for the Republic but has yet to declare his international allegiance, and yet to have a conversation with O’Neill on the issue.

“I haven’t spoken to him” said the manager, speaking at the Football Association of Ireland’s Abbotstown headquarters. “I’ve said umpteen times if people want to show willingness to come and play for us that is absolutely fine by me,

“ I’m not going to chase it. I won’t be chasing him. I saw where he was talking on some TV programme when he was obviously disappointed with not getting in the England squad. That’s absolutely fine. When asked the question he said he wanted to take his time. Mark is a fine player, but just to reiterate: I’m not chasing him.”

Nor is there is a place for Cillian Sheridan.

The Apoel Nicosia striker, the only Irish man playing in the Champions League, has again been overlooked despite O’Neill selecting eight frontmen with the likes of Conor Sammon and Daryl Murphy preferred by the manager.

The manager admitted he hadn’t yet seen Sheridan in action for his club in the recent 1-0 Champions League defeat to Barcelona, but that he expected performance analyst Brian McCarthy would supply him with footage.

A more likely call-up in the near future is Ipswich forward David McGoldrick who has made clear his desire to play for the Republic.

“He has made noises about the Irish thing,” said O’Neill. “We’re chasing that up at this minute, I think there’s a genuine connection. I watched him last night on TV, he’s definitely got ability and those type of players I think over the next few months and certainly the next year will maybe come to the fore.

“The squad that we have now may well be different to the one we have in six, 12 months time. That’s the nature of the business.”

Shay Given is one of five goalkeepers included after he came out of international retirement last month.

Ireland take on Gibraltar at the Aviva Stadium on Saturday, October 11th at 5pm, before travelling to Gelsenkirchen to take on Germany on October 14th, with the squad due to be cut down to 23 before it assembles in Dublin on October 7th.

1 Reality Bites – Tales from the new normal: Caitríona Cormican
2 A beautiful, happy accident - Moneyball is the best sports movie ever
3 Is it time for the New England Patriots to tear it down and start again?
4 James McClean still failing to learn his own online history lesson
5 Matt Williams: We all need a bit of Bud Maher’s resilience right now
Real news has value SUBSCRIBE
Crossword Get access to over 6,000 interactive crosswords