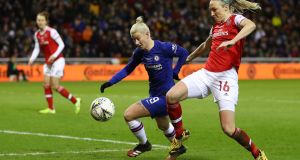 Louise Quinn in action for Arsenal. The Irish defender has parted company with the club after the season was ended. Photograph: Catherine Ivill/Getty Images

Republic of Ireland international Louise Quinn is hoping to stay in England after parting company with Arsenal in the wake of the Women’s Super League season having been wrapped up early and Chelsea declared champions based on points per game.

“I’ve known for a little while, the past month or so,” says the 29 year-old defender, “but it’s very, very sad, particularly with the circumstances, it would have been nice to say a proper goodbye to the girls. But I’m realistic, that’s football.

“I thought the decision to cancel the season was the right one when it was made [on May 25th]; things had been dragging on and mentally it was getting harder and harder to deal with not knowing what might happen, but then when you see them getting back playing in Germany and other countries you do wonder . . . I think they were in a position with the pandemic in the UK, though.

“It’s a brilliant club and I had an absolutely fantastic time there but at the time I do want to be playing as much as I possibly can from an Ireland perspective. Everything about Arsenal is brilliant but I didn’t play as much this year which was hard after starting almost every game in a title-winning season. And while I feel I’m very much a team player who contributed a lot, you naturally want to play every game.”

On the face of it Quinn, who is back home in Blessington at present, should be in a fair bit of demand after the spell in north London and an outstanding run of performances last season with Ireland but, she acknowledges, “it is a tough time in sport generally and a very unpredictable one in women’s football.

“The Women’s Super League has made massive strides since the World Cup and it’s great that more men’s teams have been backing the women’s sides but when they need to cut, you’d imagine the women’s game is going to be vulnerable. Really, you’d like to think that we were getting past that point but there is a lot of uncertainty right now.”

With the opening of the transfer window a couple of weeks away, she says many clubs do not know their budgets for next season yet and she is far from sure what options she might have. Still, the former Peamount player is keen to stay in the WSL. “I’m open to everything,” she says, “but ideally I’d like to stay in England. I enjoy the football there, I like living there and it’s close to home. I feel like I had my time away in Sweden which I enjoyed immensely.”

As Chelsea, who were a point behind Manchester City with a game in hand and three ahead of Arsenal, were declared champions, Liverpool, where Ireland’s Niamh Fahey plays, were relegated.

The club, which is on the verge of lifting the men’s title, said that it was “disappointed” with the way the season had been concluded. They will be replaced in the top flight by Aston Villa, although no decisions have been taken as to when next season might start.

1 Dara O’Shea moves West Brom closer to a top flight return
2 The unsolved mystery of Goran Ivanisevic’s stunning Wimbledon win
3 Stephen Kenny: Ireland reaching the Euros would be ‘extraordinary’
4 Monica Seles: The warrior queen who could have been the best ever
5 Tipping Point: DeChambeau’s transformation raises questions, but who will ask them?
Real news has value SUBSCRIBE
Crossword Get access to over 6,000 interactive crosswords