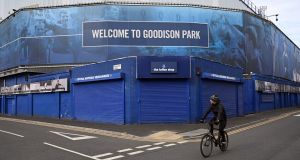 The Everton v Liverpool game that could decide the Premier League title is set to go ahead at Goodison Park on Sunday June 21st. Photograph: Paul Ellis/AFP via Getty Images

The Premier League’s clubs have been presented with a provisional fixture list for the first three full match rounds of Project Restart, with the standout detail on the opening weekend being that Everton are set to face Liverpool on Sunday June 21st at 7pm – a game Sky plans to show on its Freeview channel.

If Manchester City were to lose to Arsenal on Wednesday June 17th on the reopening night when the games in hand from when the competition was shutdown in mid-March are played, then Liverpool could claim their first league title since 1990 with a victory in the derby.

It is hoped the game will be held at Goodison Park, rather than a neutral venue which had been suggested by the national police force, who are wrestling with various logistical issues. Merseyside police have indicated that they do have the capacity to help to stage it at Goodison. The city council’s safety advisory group will meet on Monday and it should be confirmed then whether the match will be at Goodison.

Neutral venues were one of the discussion points at a broadly positive conference call between the league and the 20 clubs on Thursday. The issue has swung one way and then the other, with it appearing at one point like a prerequisite for the season to be finished before it faded from the agenda.

It has since returned in relation to specific higher-risk matches and, although all the clubs favour playing at home and away, there is agreement that if neutral grounds were needed for a small number of games, then so be it. One reason for them could be a local rise in coronavirus cases.

There were not too many resolutions passed during the three-hour call, although the use of five substitutes for the remainder of the season was voted through. Shareholders also approved an increase in the number of players on the bench from seven to nine.

Some of the demands from broadcasters to enhance their coverage were granted – namely a camera in the tunnel, a microphone on the coin toss between the captains, a celebration-cam and optional crowd noise on the TV. Dressingroom cameras and half-time interviews are unlikely to happen. They were not discussed during the meeting.

The scheduling of the fixtures beyond the third full match round, when the FA Cup quarter-finals also enter the equation, has not been finalised. It is important to note that the schedule for the first three full rounds is provisional, with minor tweaks possible. The extensive discussions have involved all four broadcasters: Sky, BT Sport, the BBC and Amazon.

There has been a good deal of to and fro over curtailment scenarios in the unhappy event that the restart stalls and the season cannot be completed, with the league favouring an unweighted points-per-game calculation. However, nothing was decided on this at the meeting, with it being kicked down the road for another day.

There was the feeling that with the return so close, it was better to concentrate on the numerous items that needed to be fine-tuned rather than take up time with something that may not be required and could be hard to agree upon before the resumption. After a few matches, the table could look rather different so perhaps clubs do not want to commit to something they later regret. Options are to remain open until a decision must be taken.

The detailed behind-closed-doors matchday protocols were discussed and the clubs will continue to do this next week. There was no agreement on whether players injured in January and left off the 25-man squad lists will be able to come back. – Guardian

1 Monica Seles: The warrior queen who could have been the best ever
2 IRFU in line for €75m windfall as CVC acquire 14.5% Six Nations stake
3 Séamus Heffernan given 22-day whip ban by Chantilly stewards
4 Eamon O’Shea: We spent quite a bit of time talking about older people rather than to them
5 Bryson DeChambeau motors home with 65 to win in Detroit
Real news has value SUBSCRIBE