“We are Argentina, we should not be concerned with how our rivals play,” he said at a press conference 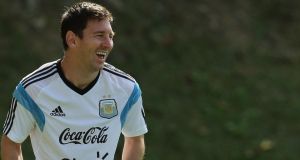 The phenomenal footballing talents of Lionel Messi when placed alongside his awkwardness in dealing with the media once led to the story doing the rounds that the Argentina ace has Asperger syndrome.

His family dismissed the rumour and threatened to sue former Brazilian star Romário for spreading it and as his leadership of this Argentina squad grows what might have once seemed an uncommon shyness can increasingly be read as disdain for the press.

It has also proved a very intelligent hoarding of influence. By typically saying little, when he does speak Messi’s words now carry great weight. And since his team’s opening 2-1 win over Bosnia and Herzegovina he has not been shy in making clear his opinion on how the team should approach the rest of the tournament.

“We are Argentina, we should not be concerned with how our rivals play,” he said at a press conference at the squad’s base in Belo Horizonte this week. “The only thing that matters is that we feel good in ourselves.” And then his version of what exactly that means: “I prefer 4-3-3.”

For Argentina’s media such frankness is a clear message to Alejandro Sabella, the coach who left his star isolated in the first half against Bosnia by setting his team up in a defensive 5-3-2 formation against World Cup novices.

Rumours abound about what happened in the dressing room at half-time.

Did an unhappy Messi take charge? Did star and coach argue? Or was there a mature footballing discussion between coach and squad veterans Messi and Javier Mascherano? The full story is yet to emerge but the side that did so for the second half had been rejigged into its star’s preferred 4-3-3. Messi duly scored and generally posed a greater threat once Gonzalo Higuaín had been added to the attack.

This is Messi’s third World Cup and he appears desperate to finally shine on the biggest stage of them all. Now about to turn 27 it would be understandable if the greatest player of his generation demanded the tactical refinements he thought necessary in order to further his ambitions.

After all, without raising any objections at the time – at least publically – he was one of the victims of Diego Maradona’s kamikaze approach in South Africa four years ago. Part of a team essentially seeking to play 4-1-5 his reward then was a bit-part role in the humiliating 4-0 defeat to Germany at the quarter-final stage.

Now the problem is his coach’s sudden excessive caution. Despite his team’s win the Bosnia game felt like a defeat for Sabella. His refusal on the eve of the match to confirm he would deploy the usual 4-3-3 transmitted uncertainty. After all, the formation was central to the team’s rich vein of form in qualifying. To then abandon it for a five-man defence against minnows smacked of timidity.

Sabella had the humility to admit his mistake telling the post-match press conference that “sometimes the errors are mine”. But how far such errors have undermined his standing in the dressing room is unclear. But not everyone is convinced Messi’s declarations this week are as important as the country’s press thinks. Asked about them his predecessor as Argentina captain Juan Sebastián Verón said he was not surprised or gave them much relevance.

“On the contrary I think that without getting into a confrontation it’s good that a player gives his opinion and the coach gives him the space to do so,” he said.

Verón knows Sabella well having captained his Estudiantes side to the Libertadores Cup in 2009 and does not think the debate will fluster the coach. “About this sort of thing he is intelligent. He will not take it as an imposition by Messi but an opinion.”

1 Owen Doyle: Creeping professionalism of schools rugby a threat to the game
2 Officials and referees brace themselves as new GAA rules kick in
3 Niall Quinn happy to step into the breach at FAI
4 Cox calls for a more relaxed transfer regime in the GAA
5 McNamara outlines the scale of opportunity for Ireland’s U-20s
Real news has value SUBSCRIBE
Crossword Get access to over 6,000 interactive crosswords