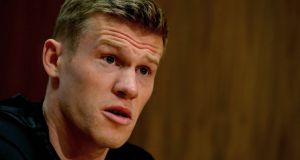 James McClean has provoked angry online criticism again after posting an image of himself on his Instagram account wearing a balaclava while purporting to home-school his children.

In what is clearly an ill-judged attempt at humour related to the fact so many children are currently having to be educated by their parents, the 30-year-old Republic of Ireland international is sitting above his two kids as they look up at him, his face obscured by the balaclava. The caption: ‘Today’s School lesson – History,” is accompanied by an emoji intended to underline the fact that the message is meant to be humorous.

The paramilitary reference seems like a bit of an own goal, however, by a player who seemed to have made significant strides in recent months to highlight the abuse he is routinely subjected to while playing his club football in England.

McClean had spoken eloquently on a number of occasions this season both about that abuse and the increased support he has received from the players’ union in England, the PFA.

After Stoke City’s game at Huddersfield Town had to be halted on New Year’s Day, the association issued an impressive expression of solidarity with McClean and called on all parties to take greater action against all forms of racism and sectarianism.

“There is no justification for this or any other type of abuse,” it said, “and the PFA stands fully beside every player who faces discrimination.” McClean subsequently welcomed their statement.

Six weeks prior to that, at an event in Dublin, the Derryman, who has long been a target of abuse over his refusal to wear a poppy on his clubs shirt around Remembrance Day, had expressed his appreciate of the fact that a senior official at the Football Association had been in touch to offer its support too.

“Maybe the tide is turning,” he said. “I appreciate the text; it said that if there were any issues, I should report it. It was the first time that such support was shown. It’s a long time coming and it’s something I appreciate. I was shocked because it was a random number. But as much as I was shocked, I appreciate it as well.”

Both organisations had been slow to recognise the treatment McClean was being subjected to; a product, in part, of the increasingly overblown nature of football’s involvement in the annual Remembrance Day but both could be forgiven for feeling that the player has not done much to help his or their cause on this occasion.

There was no immediate reaction from Stoke City.