Benefits of movement in football are well documented, but ability to stay put is key also 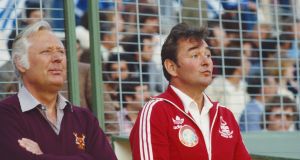 A lot of noise, talk, matches and goals have passed since a sleeting afternoon at Oakwell when Barnsley were the surprise contenders for a place in what was then called the Premiership. But Danny Wilson’s words that cold afternoon have stuck.

Little old Barnsley. It was February 1997 and they were about to play big, bad Wolves, whose manager, Mark McGhee, tended to think the top flight was more their cut.

Wilson was the Barnsley manager, brought in by Viv Anderson, who then departed for Middlesbrough. Wilson was 34 and a novice coach, still playing.

By 37 his boots had been hung up and he was getting a grip on his next level. He would say things such as “the game is not about managers or coaches”, as managers and coaches said then. Some still do.

Wilson was paying his players a compliment, diverting attention. Yet he knew the game often is about managers and coaches and promptly illustrated why.

As a young player he had been signed by Nottingham Forest. It was 1983 and Wilson moved from Chesterfield, 19th in the old Fourth Division, to Forest, fourth in the First Division.

Wilson was small, 5ft 6in on his toes, and he felt small. This was a huge leap: Forest had been champions of Europe not long before and had a certain Brian Clough in charge. In the space of a fortnight Wilson went from facing Orient to playing Aston Villa, who were the new reigning European champions. He scored on his debut, making a near-post run to connect with a Garry Birtles cross.

“I was 22, signed from Chesterfield and they had won the European Cup,” Wilson said of the Forest squad. “I was in awe of them.

“I thought I was supposed to run around, show enthusiasm. But Mr Clough, he just shouted at me: ‘Hey you, thick bastard, stand still.’”

Clough had a way with words.

Wilson got the point, though. Clough told him that while others run, good players sometimes stand. By doing so, they create room for themselves. All Clough had to do was nod towards his left winger.

“John Robertson was magnificent at standing still,” Wilson said, still with a touch of awe. “He just carried space.”

An idea was embedded and even 14 years later Wilson was referring to it: “I find myself saying it now to my players.”

Fast-forward another 20-odd years and the notion of standing still resurfaced in an article this week by the analyst Tom Worville. It was about the use of data in modern football, and its misuse.

There is a fascination with how far a player runs during 90 minutes, as if that in itself is an indicator of quality. Equally, a lack of mileage is read as a lack of application. Mesut Özil tends to get mentioned.

But as Worville says: “There’s also some evidence to suggest that running less actually can be beneficial – just ask Lionel Messi. Most players have the fitness levels to last a full game but the manipulation of space is what matters.”

For those whose analysis is led by metrics, the measurement of time and space and players’ intuitive understanding of the geometry of the game presents obvious challenges. Understanding is not something you can check on a GPS system.

This does not undermine statistics, of course, but re-enforces the fact that context is everything. To recruit players, all passes, tackles etc . . . need to be seen as well as logged. It turns out high-intensity runs, for example, can be hiked by defenders sprinting forward for corners.

The manipulation of space, not data, is what matters. It was a topic Dennis Bergkamp re-approached when he went to play in Italy. There forwards were outnumbered by defenders in a manner that simply demanded they think of ways to create room.

Bergkamp is considered to have not had a great time in his two years at Inter Milan, but flowered at Arsenal. At Highbury Ian Wright called Bergkamp “an architect of space”. The looser rhythm of an English match in part allowed for that, plus Bergkamp was maturing, understanding more of what “Mr Cruyff”, as he first knew him, had taught at Ajax about movement.

When the time came for Bergkamp’s autobiography, its title was: ‘Stillness and Speed’.

“On the field my greatest quality was seeing where the space was, knowing where you can create space,” Bergkamp says in it.

But if a man on the ball stops, team-mates must move to make space. Otherwise we are all static. Life, play, slows.

Cruyff sought constant movement, to drag opponents out of shape. An excellent first touch is taken for granted – Bergkamp loved watching Glenn Hoddle as a boy because of this, while John Robertson continually bought himself space with a touch that gave him immediate control of the ball and his situation, which was often spatially unpromising.

Cruyff and Clough thought about the game and, importantly, relayed those thoughts. Lots of players understood the ideas sub-consciously but, verbalised, they took on greater meaning, built a framework.

And the thoughts were passed on. When Teddy Sheringham joined Forest long after Wilson had departed, Clough was still there, calling him Edward, preaching the same pass-and-sometimes-don’t-move football.

Sheringham was good at standing still, taking a yard when given an inch. When he moved to Tottenham for a second time, he clicked with Robbie Keane, according to Keane.

“The one who taught me a lot in terms of how to play that No 10 role was Teddy Sheringham,” Keane explained in a recent interview at Middlesbrough exploring his coaching ideas.

“When I went to Tottenham he kept saying to me: ‘Stand still, because everyone else will run around you.’

“Young players now have so much energy but running stats can be misleading. It’s good for you to have them, but sometimes it makes sense to stand still.”

It was thoughtful advice. Carry space.

Today there is no option, a standstill it is.

Barnsley lost to Wolves in ’97, by the way. But it was Wilson’s team promoted three months later, not McGhee’s. Wilson was named League Managers’ Association manager of the year.