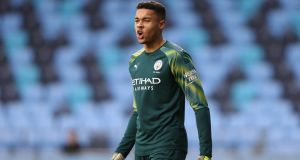 Gavin Bazunu: “The big one of course, is distribution, but also confidence and decision making; being able to play certain passes, to stay calm and composed in certain situations where at other clubs you might be asked to kick it long.” Photograph: Charlotte Tattersall/Getty Images

It has been an exciting first year away for Manchester City goalkeeper Gavin Bazunu but the 18-year-old says he is happy to be one of football’s many returned exiles just now.

The former Shamrock Rovers goalkeeper is back at home with his family in Firhouse for an unexpected break as Covid-19 puts professional life on hold all across the continent. Even if his season is cut short, he has plenty of progress to reflect on.

“I live on site over there, which is brilliant,” says the Dubliner, who was one of the former Airtricity League players to establish a fund to support fellow professionals affected by the enforced break back in Ireland this week.

“It can be difficult at times, the fact that you are always in the same area but I love being in that place. There are 10 or 12 lads who are staying and we just go downstairs and we are in the changing room.

“It’s always nice to be home, though. Usually it’s just for a couple of days; this time I’m not sure how long I’m going to be for . . ,

“When they suspended the Premier League, we were are all told to just sit tight for a couple of hours and then they came back to us and told us we were free to go home. At first, it seemed like the international lads mightn’t get away because of the flights but then the next day they said that was okay and they booked one for me.”

It is an unexpected interruption to, maybe the premature end of, a first year on City’s books for Bazunu that could hardly have gone much better. The club were careful with the teenager when he arrived over at the start of last year, allowing him to continue working towards the Leaving Cert while settling into the Under-18 squad and beginning to get an early sense of the ‘City way’.

Since the summer, though, and his inclusion on the first team squad’s preseason tour to Asia, he has been more than happy with the way things have gone, not least because of the fact that as a relative latecomer to goalkeeping, he had so much to learn.

“The things that I would have done were the things that came naturally; the things I felt comfortable with. The [way you think is that the] only job you have as a goalkeeper is to keep the ball out of the net and so I was just going off what I thought was right or the best way of going about things.

“Through the first few months at City, they weren’t trying to push me too hard because I had all of the education stuff on my plate as well so it was just about really training and seeing how to play the City way; trying to get better with my feet. Implement the techniques that they want me to implement.

“This season has been more about applying it to games and being comfortable playing the way City want me to play. The big one of course, is distribution, but also confidence and decision making; being able to play certain passes, to stay calm and composed in certain situations where at other clubs you might be asked to kick it long. At City, they still want you to play. In the right situations, of course, but a lot more than at other clubs, I think.”

The evidence suggests they have liked what they have seen with Bazunu getting a lot of game time with the Under-23 side and days here and there, including a couple of cup matches, in among the first team squad

“It feels very different,” he says of the life in Premier League’s Under-23 set up after the experience of senior football here.

“You don’t have many people at the games and sometimes there isn’t the same pressure but the quality is there; you can see it in the players.”

No matter how talented they are, it will be a long road from that status to first team football. Bazunu readily acknowledges that and is now studying for a degree in Sport and Exercise science that will serve as something of an insurance policy.

But those who have followed his progress so far believe he has what it takes to complete the journey to the top.