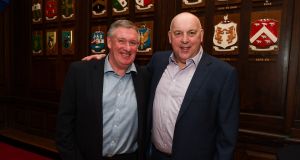 Famously the only member of the Ireland squad at Euro ’88 with a fluent command of Russian, a stint at Britain’s GCHQ was amongst the career options Tony Galvin had pursued before football intervened.

It is entertaining to imagine the young Galvin weighing up whether he should join the ranks of the spies or the Spurs although, in reality, he had already ready opted for teaching by the time Bill Nicholson came along to see him play for non-league Goole Town on a snowy midweek night up a mountain.

He still seems slightly amazed that the title-winning former Tottenham manager made the journey on a night like that but it changed his life. Galvin, whose parental great grandparents were Irish immigrants but who actually qualified to play for Ireland through a grandfather on his mother’s side, had gone to grammar school and played rugby until his late teens.

There was a trial or two despite the fact that he was a latecomer to soccer and played rarely enough for his local club, YMCA.

He even earned a couple of caps for England’s schools team at Under-18 level but it was at university that his talent really started to shine through although it was another year or so after that before Nicholson decided he was good enough to join Tottenham.

Signed in mid-winter, for the first six months he was only part-time but the money – £50 a week – was two and a half times what he had been on before and Galvin reckoned that if it turned out he was flying too high, he would land somewhere between the-then First Division and the Fourth Division as he floated back towards earth.

“I probably thought Tottenham was a level too high at the time,” he acknowledges, while back in Dublin with quite a few of his former Euro’88 team-mates ahead of Sunday’s European qualifying draw to promote the opening of the National Football Exhibition which will be on at The Printworks, Dublin Castle until December 9th.

“If I don’t make it, I thought, there’ll be something else. I’d done my teaching [qualification] , I got that behind me. So I thought, I’d nothing to lose, see how it goes.

“The culture shock was massive. When I went full-time I was 22. Quite old. I’m playing in reserves with lads who are 17, 18. Lads who been there from when they were kids. My first season there, not a lot happened but the second season went well, I started to get into the team.”

Chris Hughton recruited him for Ireland and he made his debut away to the Netherlands in 1982. The first time he played against England, he recalls, he got a lot of stick but he sounds like a man who never gave it a second thought and he was certainly a key player at those European Championships which he talks about with great fondness.

Jack Grealish, he firmly believes, has made a mistake not making the same decision he did while Declan Rice is, he fears, currently on the brink on making an even bigger one.

“He could,” said Galvin, “be making the biggest mistake of his life. The longer it goes, he could be thinking there is an England cap around the corner but I’d be saying: ‘No do it [play for Ireland] because it will make you a better player, it will increase your value and you might have the making of a future captain of the team.’ If he plays for the Republic, he’s going to be playing for ten years.”

Galvin knows how precious those years at the top are.

After his playing days finished, he had a stint as assistant manager to Ossie Ardiles at Newcastle but then couldn’t get another job in the game and so retuned to education, working in local colleges with kids in their late teens who had “messed up” first time around before then moving into the civil service from which he retired a few years ago.

These days, he coaches a bit in a local primary school, does a bit at Spurs on the hospitality side of things and sounds rather content with his lot.

He still follows Ireland, though, and having encountered what he regarded a fair bit of snobbery towards the team in his own day, seems still to be smarting over the slightly disrespectful way he feels Christian Eriksen spoke about Martin O’Neill’s side in the wake of their various recent encounters, regarding how negative the team was supposed to have been etc.

“I think he actually said, ‘they always play like that’, says the 62-year-old with a hint of exasperation. “No they don’t,” he continues, by way of reply.

“When Ireland went to Denmark they played well. They could have nicked that game and I think when they played at home they weren’t particularly negative.

“They just got fu**ing hammered,” he concludes to an explosion of laughter. He’s still got a way with the words, it seems.

1 Stirling and Balbirnie tee off to tee up another famous Ireland win over England
2 RG Snyman primed for hectic run with Munster and South Africa
3 Seán Moran: Boylan documentary offers a compelling insight into former Meath boss
4 Restrictions threaten 147 unbroken years of Irish athletics history
5 ‘A win like that is special and one we’ll remember forever’ - Ireland skipper Balbirnie
Real news has value SUBSCRIBE
Crossword Get access to over 6,000 interactive crosswords