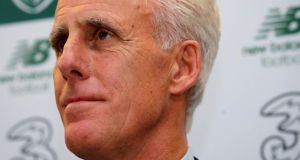 Mick McCarthy: “I’ll take what comes as I always have done before and then see what I can do to deal with it.” Photograph: Ryan Byrne/Inpho

There will be all sorts of history made in Euro 2020. Ireland, having successfully won the right to stage a portion of the tournament that will, for the first time, be spread across 12 nations, must now avoid being one of the first countries to host a portion of the finals having failed to qualify for them. Three months before the qualifying games begin, Mick McCarthy and his employers will get a better sense of the team’s chances by late Sunday morning at the Convention Centre in Dublin, where federation officials from across the Continent will gather for the draw.

“I can’t do anything about so it doesn’t matter what I want, really,” says the newly reappointed Ireland boss when asked what he is hoping for out of the process. “We have no get-togethers, no friendlies, nothing really that we can use to prepare for it, so we will see what happens and then get on with the business of coping with it as best we can.

“I’ll take what comes as I always have done before and then see what I can do to deal with it.”

Ireland’s poor performance in the Nations League means McCarthy’s men will be third seeds and will therefore have to punch at least one place above their weight in order to secure one of the automatic qualification spots on offer from each group.

Fail, though, and as long as six teams who did worse than them in the new competition do not qualify automatically, there will still be the fallback of a play-off in the spring of 2020.

If there is one thing that all of the managers who harbour serious hopes of qualification seem sure to agree on heading into the draw, it is a desire to avoid Germany as their group’s second seeds.

Joachim Löw’s side may have made life a little more complicated for themselves than they needed to with a poor Nations League campaign of their own, but the fear will be that they will now make it a lot more challenging for somebody else. There are no pushovers in Pot A, and so drawing a side of Germany’s stature from Pot B would surely be regarded as a setback for McCarthy.

The 59-year-old understands the importance of having a bit of luck on these occasions. During his previous stint in the job, Ireland lost qualification play-offs in 1997 and 1999, against Belgium and Turkey respectively. In 2001 they might have drawn with either of those two sides again or, as it happens, the Germans, but instead landed Iran.

Quite what the equivalent stroke of good fortune on this occasion might be is hard to gauge. Poland are, by just about every measure, the lowest-ranked side but McCarthy might quite fancy another crack at the Netherlands.

The Dutch are still in recovery after a very poor spell with home defeats of both France and Germany (against whom they scored five times over two games) in the Nations League having taken them to the semi-finals.

Still, McCarthy will have fond memories of their visit to Dublin in September 2001 and the 1-0 win that was probably the highlight of his first stint in charge. Having drawn 2-2 away, Ireland actually took four points from them over the course of a very good campaign. Doing anything like that again now would be the equivalent of planting one foot in the next finals.

Perhaps it is more realistic, though, to look at second seeds who might be toppled, and it is hard to look beyond Iceland on that front. After a string of outstanding results, two straight tournament qualifications and a five-year spell as the European game’s most retold success story, the wheels came off their bus in 2018, a year in which the side, now managed by Sweden’s Erik Hamren, endured much the same sort of trauma as Ireland.

With just one win from 16, their recent record is actually worse, but then their League A status in the Nations League meant they were playing better teams. Hamren will hope to have steadied the ship by the time qualifying gets under way in March.

Whoever is drawn, the managers will have no say regarding the order in which the games are played, with Uefa simply handing each nation a fixture list a few hours after the draw is made.

The scale of McCarthy’s task will be clearer then but the aim will be the same regardless: to ensure the FAI are happy hosts, not the sort who have to sit by, watch and wait for the music to end and the guests to go home.

He gives every impression of believing that he is up to the challenge, but he will take whatever good fortune is going tomorrow.