Alexis Sanchez set to miss up to 10 games for United 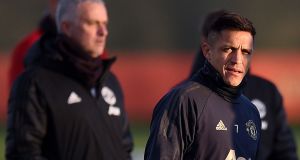 Alexis Sanchez’s miserable spell at Manchester United took another turn for the worse on Friday with manager Jose Mourinho believing he faces several weeks out with a hamstring injury. Photo: Oli Scarff/Getty Images

Alexis Sanchez is set to miss Manchester United’s hectic festive schedule after Jose Mourinho revealed he expects the Chilean forward to be sidelined for around six weeks.

Sanchez has struggled to hit top form since his move from Arsenal in January and was surprisingly left out of the squad altogether for the midweek Champions League victory over Young Boys.

His week worsened drastically when he injured his hamstring in training on Thursday and Mourinho thinks the 29-year-old is set for a lengthy absence.

“(There have been) no scans yet, but the player is experienced, the player knows what the injury is,” Mourinho said.

“Also from the top of my experience, just the painful scream and the way the injury happened, I know it’s going to be for a long time.

“It’s not a little muscular injury that in one week or 10 days, the player is ready.”

Pressed on a specific timeframe, Mourinho asserted his belief that the issue is more serious than the muscular injury that is set to keep defender Victor Lindelof out of action for three weeks.

If Mourinho is accurate with his forecast then Sanchez will miss up to 10 fixtures, including the visit to Old Trafford next week of his former club Arsenal.

First for United, though, is a trip to struggling Southampton at teatime on Saturday, with Mourinho setting his sights on closing the gap on the Premier League’s top four over the next few weeks.

United currently sit seventh and are seven points behind fourth-placed Chelsea, yet Mourinho is hopeful of a concerted effort to push up the table, having already sealed their place in the Champions League knockout stages.

“We can now just focus on the Premier League and we need points. We need to improve our position in the table, we want to close the gap to the top four.

“We want to be smelling these positions. If not there then behind, but just smelling that for the second part of the season, so we need points.

“But everybody for different reasons needs points. We are going to have a very difficult match against a team that I know is not going to have any problems.”

Mourinho was given a boost after United triggered a one-year extension on influential goalkeeper David De Gea’s contract.

The Spaniard’s deal was set to run out at the end of this season and he would have been able to enter into a pre-contract agreement with another club from January 1st.

But United warded off the potential interest of several of their domestic and European rivals, much to the delight of Mourinho, who anticipates De Gea putting pen to paper on a longer-term deal soon.

“David wants to stay, his agent (Jorge Mendes) wants the player to do what the player wants, he’s not the kind of agent that is manipulative like others and try to influence the player.

“His agent lets him think and decide by himself, so I think the point is just to agree the contract that the club wants to give and the player wants to accept. Just my feeling, they are going to finish well.”