Claims of abuse lodged against men in federation including president, Karim 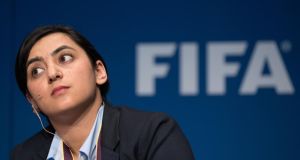 Fifa is examining allegations that members of the Afghanistan national women’s team were sexually and physically abused by men from the country’s football federation, including its president, Keramuudin Karim.

The claims have prompted the team’s principal sponsor, Hummel, to cut ties with the Afghan federation (AFF) and call for new leadership. The Danish sportswear manufacturer said it was “presented with strong allegations of severe mental, physical, sexual and equal-rights abuse of the female players by male AFF officials”.

Senior figures associated with the Afghanistan women’s team have told the Guardian that abuse took place inside the country, including at the federation’s headquarters, and at a training camp in Jordan in February 2018.

Khalida Popal, a former head of the women’s football department at the AFF, who was forced to flee the country in 2016 and seek asylum in Denmark, has spoken to the Guardian, together with the players Shabnam Mobarez and Mina Ahmadi and the head coach, Kelly Lindsey, about the ordeal of players within the country and their frustrations with a system that, they feel, has failed to protect them.

The AFF has not responded to Guardian requests for comment. Fifa confirmed it was investigating the claims and a source at world football’s governing body told the Guardian it had been working with the United Nations on some players’ safety.

The source said: “Fifa has been fully aware of the situation in Afghanistan and have been working hard to secure the safety of the girls. They have been working very discreetly with those involved, given the sensitive nature of the accusations and danger to life posed, since March to pull together evidence for a formal investigation and have brought in the UN – such is the extent of their concern for the girls still in the country and the need to bring in an organisation that can make political and legal interventions outside of Fifa’s abilities.”

In its statement Fifa said: “The serious subjects mentioned are being looked into by Fifa. As some aspects of these allegations involve sensitive topics linked to the protection of those involved, we have sought support from relevant parties who willingly offered their support to Fifa. The matter is currently being addressed in a ‘do no harm way’ towards the victims.”

Ms Popal said that in the course of an investigation she has carried out into the allegations she heard claims of physical abuse, sexual abuse, death threats and rape.

“It was very difficult for us, living in the country, to talk about these things because these are very powerful guys. If a player from Afghanistan raised a voice they can get killed,” she said.

Having fled the country two years ago, Ms Popal organised national team training camps in Jordan, Japan and the UAE which have brought together players from inside and outside Afghanistan. She told the Guardian that for the first such gathering, in Jordan in February, the players arriving from Afghanistan were accompanied by two men.

“They sent two male representatives, going under the title of ‘head of women’s football’ and ‘assistant coach’,” she said. “They were bullying and harassing the girls, particularly the ones from Afghanistan because they knew they wouldn’t speak up. I confronted them, told them they can’t do that and I’d make a complaint.

“It continued. These guys were calling on the rooms of the players and sleeping with the girls. AFF staff members would say to girls that they could get them on the team list and would pay them £100 a month if they would say yes to everything. They were pushing and forcing the girls. Coercing them.”

She said players reported to her what was going on and told her she needed to get it stopped. Ms Popal said: “I phoned the president and said: ‘You should stop this. If you don’t stop it I cannot stop the girls from going to the media with their stories.’ He was promising that he would take serious action. He said to just keep playing football and we should keep it quiet until they come back and then [the men] will be punished.”

According to the American head coach Kelly Lindsey, the two male officials alleged to have abused players in Jordan “were promoted and moved to other areas within the AFF”.

Afghanistan’s Shabnam Mobarez has said a contract she was asked to sign by the FA is “taking away my basic human rights away from me, and my rights as a female”.

It was, she claimed: “Because some of them were going to talk to the media. The president [privately] labelled them lesbians to silence them from speaking out about the sexual abuse in Jordan and abuses by coaches. He beat one of the girls with a snooker cue. He beat the player and said she was a lesbian and she was kicked out of the federation. If they spoke out, no one would listen to them because being accused of being lesbian or gay in Afghanistan is a topic you don’t speak about and puts you and your family in a lot of danger.”

Ms Popal said that when she learned that nine players had been sidelined she started an investigation and that multiple allegations were made regarding Mr Karim, a former governor of Panjshir province and chief of staff in the ministry of defence before he took over the presidency of the AFF in 2004.

“While I was doing the investigation with these players I found out the huge extent of the abuse, sexually, mentally, physically, happening from the president himself,” she said.

She claimed: “Not only that, he has a room inside his office that is a bedroom with a bed. The doors of his office are fingerprint recognition, so when players go in they can’t get out without the fingerprint of the president.

“I tried to search for the girls. I found some of the girls that were sexually abused, and physically abused if they said no. The federation would make an excuse to get rid of the player so that if they came out [and spoke publicly], it would look like they just upset about being kicked off the team. That investigation took me half a year and there was physical abuse, sexual abuse, death threats and rape cases.”

Lindsey said they tried to raise the issue with the Asian Football Confederation (AFC). “They basically said: ‘We can’t speak to you about this because you’re not a member association, we need your president or your general secretary to speak with us.’ ”

An AFC spokesperson told the Guardian: “The AFC is looking into the various media reports which have been published and the complaints that some Afghanistan players have made on social media. There have been no reports of any sexual abuse to the AFC from any Afghanistan player.”

A further development, which hardened the determination of the players to get their stories out, was the arrival of women’s national team contracts that those involved describe as “aggressive,” “one-way” and about “silencing” players.

Those that did not sign were kicked off the team. Ms Mobarez tweeted that the contract prevented her from being paid for playing, limited their ability to get sponsorship elsewhere or pursue other promotional ventures, and removed mediation in disciplinary proceedings. “I think this contract is very inhumane because it’s taking away my basic human rights away from me, and my rights as a female,” Ms Mobarez, the captain, who plays in Denmark, said.

“I don’t know any of the male players who have had to sign anything like this. I see no equality.” Ahmadi said: “It empowers us more and makes us more motivated to spread the message and accomplish great things. We all still have the same goal. They can’t break us.”

Hummel said it had “clear documentation of breach of contract as well as the fact that AFF leadership has been aware of the allegations since February this year without taking actions or informing sponsors. The documentation of unacceptable behaviour includes, but is not limited to, a new contract stripping player of several basic human rights.” – Guardian

1 St Michael’s conveyor belt showing no signs of slowing down
2 Leinster qualify as top seeds with Benetton win
3 Munster mood will be determined before kick-off
4 Gerry Thornley’s guide to the Champions Cup pool permutations
5 Welcome to Iten in Kenya – home of champions and cheats
Real news has value SUBSCRIBE
Crossword Get access to over 6,000 interactive crosswords