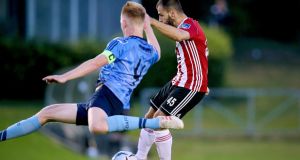 Conor Davis was sprung from the bench to help sink his former club with his first goal for Derry City as they edged up to third place in the Premier Division table. A 20th defeat of the season leaves UCD six points adrift at the bottom.

Despite dominating from the off, Derry had to come from behind to troop off level at the interval.

UCD snatched the lead on 28 minutes when Liam Kerrigan and Mark Dignam worked the ball in to recent signing Sam Byrne to shoot home his first goal for the club.

Dignam cleared off the line from Greg Sloggett at the other end before Derry finally levelled on 41 minutes.

Gerardo Bruna’s ball found the run of Jamie McDonagh who flicked it over goalkeeper Gavin Sheridan to tap in.

Derry struck for their deserved lead on 72 minutes. On the pitch just a minute, Davis worked a one-two with Barry McNamee before shooting the return to the bottom corner.

UCD midfielder Jack Keaney was sent off on 86 minutes for a foul on Ciaron Harkin, his second yellow card.

Parkhouse then added Derry’s third goal a minute from time when drilling home from Bruna’s through ball.

Australian Harry Ascroft bagged the winner for Finn Harps for the second successive week as the Donegal club overcame an out of sorts Bohemians at a balmy Finn Park.

This was a costly defeat for Keith Long’s side who missed the chance to close the gap on second placed Shamrock Rovers.

But the Harps mini-revival continues and they have now collected 13 points from their last six games are now six ahead of bottom club UCD, albeit with a game more played.

Bohs, without suspended captain Derek Pender, went into the game having lost just once in their last eight league outings.

But the Gypsies fell behind after just eight minutes when Ascroft fired home from the edge of the box following a fine build-up involving several players, notably Mark Timlin and Jacob Borg.

Ascroft, who scored the winner against Derry City last week, is suddenly becoming a real favourite on Finnside.

Bohs had to endure a sustained spell of pressure as Harps forced a series of corners shortly after the goal but without adding to their tally.

Relegation-threatened Harps were good value for their half-time lead against a Bohs side that simply never clicked into gear.

Striker Andre Wright shot shortly after the resumption but Harps then went close with Gareth Harkin stretching to meet a cross from Borg but James Talbot was well placed to avert the danger.

As the game entered the final quarter, Mark Anthony McGinley in the home goal had yet to be tested and when Danny Mandriou turned only to balloon the ball high over the bar, summing up a bad away day for Bohs.

Sub Ronan Hale was the St Patrick’s Athletic hero as his 90th-minute winner gave them victory at Turner’s Cross.

Given that the sides had drawn two of their previous three games with Pat’s winning the other courtesy of a penalty, it was no surprise that another close game materialised.

A third draw looked likely, but Hale’s low curling effort from outside the area, just as the game moved into injury time, gave the Saints the win.

While Gearóid Morrissey had an early effort from distance for the hosts which whistled wide, real chances were rare in the opening period.

City’s Joel Coustrain went closest just before the half-hour, with Kevin Toner having to defend well for Pat’s while debutant Eoghan Stokes – on early for his debut after an injury to Mark O’Sullivan – linked well with Coustrain and Kevin O’Connor, the latter’s shot blocked by Ciarán Kelly.

Pat’s went closest in the first half when Gary Shaw nearly played Conor Clifford in, Mark McNulty diving at his feet.

Stokes had a long-range effort which was well off target in the early stages of the second half and then almost dispossessed goalkeeper Brendan Clarke following a backpass but couldn’t keep the ball in play.

At the other end, Clifford drove at the City defence and into the area and while referee Ben Connolly blew his whistle, it was for a home free kick and a yellow card for Clifford.

On 72 minutes, Pat’s had a better chance as Dean Clarke latched on to a clearance and used his pace well but McNulty made a good save. While the resultant corner ended with the ball in the net, the goalkeeper was being fouled.

As the end neared, City pushed and captain Conor McCarthy headed over from a Dáire O’Connor corner while Karl Sheppard fired over when Garry Buckley set him up.

Hale might have scored on 89 as he just failed to reach a low Clarke cross, but there was still time for him to be the match-winner.