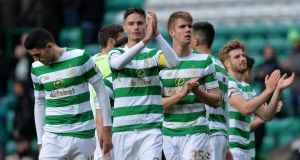 Brendan Rodgers is looking for Celtic to become record-breakers after equalling the club’s unbeaten domestic run of 62 games with a 1-1 draw against Kilmarnock.

Rodgers rested a clutch of star players with a view to the Champions League game against Bayern Munich on Tuesday night and struggled until Leigh Griffiths struck in the 43rd minute.

Killie midfielder Jordan Jones levelled on the hour and the Rugby Park side held out for a point, with left the Scottish Premiership leaders ranked alongside Willie Maley’s Celtic side of 1917.

Rodgers, who confirmed winger Patrick Roberts will miss the visit of the German giants after sustaining a hamstring injury, said: “The players deserve all the credit they get.

“It is 100 years, and to achieve that over the course of the 62 games, and to win around 56 of them, is an absolutely incredible achievement by the players.

“It is a great testament to their work over the last 17 months and they get the chance next week to go out on their own in the league to get to 63.

“So they deserve all the credit and whatever happens in their time here their name goes into the record books.”

Roberts was giving Killie defender Stuart Findlay a tough time until he pulled up on the half-hour mark, to be replaced by Scott Sinclair.

“It looks like a hamstring so we will get a scan on that,” said Rodgers

“Frustrating for him because he started the game very well but I suggest he will probably be out for a few weeks.

“It is unfortunate but the squad is here to cope with that.

“There are always going to be injuries and I have to get players up to a certain level with so many games.

“James Forrest will come into the reckoning for Tuesday but of course it is a disappointment to lose Pat to injury.

“Olivier Ntcham rolled his ankle. It is sore but we will assess that tomorrow.”

Kilmarnock boss Steve Clarke watched his side grab a last-gasp leveller away to Rangers on Wednesday night in his first game in charge.

After watching his side battle for another point against the other half of the Old Firm, to keep them off the bottom ahead of Dundee, he stressed the need for belief among his players.

The former West Brom manager said of the two points garnered this week: “It is probably a little bit less than I would have hoped for to be honest.

“I was hoping we could win one of them.

“I have been in the game a long time, I have been involved in so many matches I would be embarrassed to count.

“I have never gone to a game thinking we were going to lose. Never. There is always a way.

“If you don’t have that belief within you there is no point in going and that has been the message to the players in the last couple of games.

“It is okay to speak and say you will get a result but if you don’t believe it inside it is harder to get and in both games the players have shown they do believe.”

1 Kevin McStay: Maybe a knockout All-Ireland Championship is the long-term solution?
2 Gerry Thornley: Ireland don’t want to box themselves into a corner
3 New Killarney athletic track another jewel in the Kingdom’s crown
4 No further players to be called up to Ireland squad to face Georgia
5 Fernandes on the double as Manchester United get their revenge
Real news has value SUBSCRIBE
Crossword Get access to over 6,000 interactive crosswords