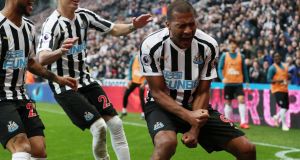 Miguel Almiron was denied a dream home debut by the woodwork as Newcastle eased their relegation fears by nudging 10-man Huddersfield closer to the Premier League exit.

The Magpies’ new record signing saw his cheeky lofted effort come back off the post as he attempted to round off a sumptuous counter-attack, but nevertheless made a significant impression in front of a crowd of 52,174 at St James’ Park.

A 2-0 victory was ultimately secured by goals from Salomon Rondon and Ayoze Perez inside the opening seven minutes of the second half with the home side having spent much of the first hammering away at Jonas Lossl’s goal as the visitors attempted to re-group following skipper Tommy Smith’s 20th-minute dismissal. Smith was sent off for a studs-up challenge on Almiron.

For the first goal DeAndre Yedlin controlled Florian Lejeune’s deep cross and Perez and Isaac Hayden helped the ball on to Rondon, who blasted home right-footed on the turn to break the deadlock.

The home side were utterly dominant as they looked to kill the game off but they had to be content with just the two.

In a Premier League game of three fiercely-contested penalties, Joshua King scored one and missed another as Bournemouth drew 1-1 with Wolverhampton Wanderers who also netted from the spot.

For all Bournemouth’s poor away form, they have not lost in the league to anyone outside the top six at Vitality Stadium this season and took the lead on 16 minutes, although Wolves claimed King went down under minimal contact from Joao Moutinho.

Wolves were further incensed moments later when referee Roger East turned down their own appeals for a penalty after Chris Mepham headed on to his own arm.

But they were eventually awarded a spot-kick when the referee harshly penalised Adam Smith. Raul Jimenez fired home but within minutes King had another chance from the spot even though Ryan Fraser appeared to be fouled by Ivan Cavaleiro outside the area.

This time King hit the post and Bournemouth also went close through Jordan Ibe, who crashed a shot against the bar, and Dominic Solanke, who should have done better when free on goal.

Bournemouth’s Jefferson Lerma received his 10th booking of the season for a foul on Moutinho and will serve a three-match ban.