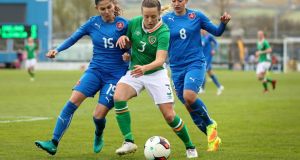 Ireland’s Harriet Scott: ”I love . . . if it was a choice between scoring or making a block in the six yard box that stops a goal, l would probably choose the block; it’s much more satisfying.”

‘The best against the best,’ may be the modern day mantra of youth development but for Ireland defender Harriet Scott it really started with the girls against the boys.

Scott’s earliest memories in football revolve around kickabouts with her father, Neil, and four sisters in the back garden but her first real challenge came when she and some of her female friends found it difficult to get a proper look-in at her local club in Caversham, near Reading.

“I played for them for two or three years but the girls weren’t playing or weren’t being moved up the ranks the way the boys were and so one of the parents took all the girls and made a fully girls team. We actually played against our own team and beat them, which was pretty satisfying.

“After that, we used to show up to tournaments and the boys would be ‘what’s going on here?’, maybe even laugh, and then we’d win which would wipe the smiles off their faces.”

Scott, primarily a left back since her return to the Irish ranks in March though she has played almost everywhere across the back as well as out on the wings at one stage or another, describes herself as “a very, very aggressive defender.” And she believes that having to compete in those early days against the boys helped her become the player she is.

Through a friend, word reached the underage set up at Reading and she joined the club at 10, spending the next six years with their academy, then progressing through the reserves to the first team. There was a break to study physiotherapy along the way, but after the club won promotion to the top flight Women’s Super League in 2015 she was offered the chance to go pro and grabbed it with both hands.

“I didn’t think I wanted to be a professional footballer when I was younger,” she recalls. “I just played a bit on the side because I really enjoyed it. But I went back to Reading, we got promoted, I was presented with a full-time contract and I had to decide; do I want to do this? And I decided. This has been my hobby for my whole life but to turn my hobby and passion into my full-time breadwinning occupation is amazing really.”

Her first Irish call-up came in her mid teens. Her connections to this country are strong with three out of four grandparents (the fourth, she says, would have comfortably qualified to play on the ancestry rule). And when she was growing up there was always a sense of instinctively rooting, she recalls with a laugh, for Ireland over England.

She was a part of the Noel King managed Under-17 team that put Germany out on the way to the final of the European Championships in 2010 and then reached to the quarters of the World Cup in Trinidad and Tobago. It is an experience she still speaks of with a touch of awe because of the mix of footballing styles she was exposed to in games against the likes of Brazil, Ghana and Japan.

But she drifted off the international scene after that as her studies took precedence for a time and she was first obliged to decline a call-up, then simply stopped getting them for a few years.

Full-time football has opened the door for her again, though, with new coach Colin Bell handing her what she says came as a surprise recall for the recent Cyprus tournament. She is intent on seizing this second chance.

Having played her part in the team keeping five clean sheets in six games under Bell, she is looking likely to start away to Scotland in Friday night’s friendly then, beyond that, to nail down a regular spot for the forthcoming World Cup campaign. She is certainly relishing the role.

“I love defending,” she says with obvious enthusiasm. “I focus very strongly on how physical I am, I use my body very well, I’m quite short but I’m good in the air for my height. And full-back is the perfect position because you do have that option of attacking a bit. But for me if it was a choice between scoring or making a block in the six yard box that stops a goal, l would probably choose the block; it’s much more satisfying.”

She has certainly made her presence felt and hopes to make an impression against a Scottish side preparing for this summer’s European Championships.

“Scotland will be interesting,” she adds. “They’re the kind of a team that we would like to emulate because they are small country with a lot of passion behind them and have managed to do something really good. It’s a good test for us because they have qualified and that’s what we are determined to next time. It will be good to see where we are in comparison.”