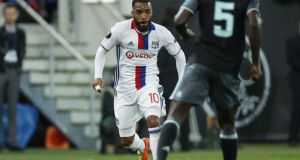 Alexandre Lacazette in action for Lyon: striker is set sign a five-year contract with Arsenal after completing a medical. Photograph: VI Images via Getty Images

Alexandre Lacazette is close to finalising his €60 million (£52.7m) move to Arsenal from Lyon, having completed his medical at the north London club’s training ground on Tuesday.

The 26-year-old striker, who has 11 France caps, is set to agree a five-year contract and, when the formalities are done, he will eclipse Mesut Özil as Arsenal’s most expensive signing. Özil joined from Real Madrid in 2013 for €48.3 million (£42.5m).

Arsène Wenger has tracked Lacazette for some time and the Arsenal manager made an unsuccessful move for him last summer, after which the player agreed fresh terms at Lyon until 2019.

But there was the sense that he would give it one more year at his boyhood club before he considered a move to one of Europe’s higher-profile leagues and he and the Lyon president, Jean-Michel Aulas, believe the time is now right.

Lacazette had looked set to join Atlético Madrid only for the Spanish club to be placed under a transfer embargo until January 2018. According to Aulas, Atlético were prepared to pay €65 million for Lacazette and so Arsenal look to have got him for slightly less.

The forward was outstanding for Lyon last season, scoring 37 times in 45 matches in all competitions, 28 of those goals coming in Ligue 1. The haul meant that he reached 100 league goals for his boyhood club from 203 games.

Wenger will be delighted to conclude the deal, particularly as he fights to keep his star player, Alexis Sánchez, from the clutches of Manchester City. He has signed the left-back Sead Kolasinac from Schalke on a free transfer.

Meanwhile, the rumour that Liverpool will sign Naby Keïta from RB Leipzig has gathered exponential pace over the last few days. The move seemed unlikely a few weeks ago but the clubs are set to meet in the coming days to thrash out a deal. Keïta, who was linked with Liverpool last summer, was one of the stars of the Bundesliga season as RB Leipzig secured an unlikely second-place finish, a fine showing in their first season in the top division.

Keïta excelled and his valuation skyrocketed as a result, with Leipzig now demanding €79.7 million (£70m) for the 22-year-old midfielder. Liverpool would have to break their transfer record for a second time this summer to land the Guinean.

Keïta has a release clause worth around €54.6 million (£48m), which will become active next summer, but Jürgen Klopp wants him now. Leipzig do not want to sell one of their best players as they prepare to play in the Champions League for the first time, but they stand to make a massive profit on a player they signed from sister club RB Salzburg for €14.5 million (£12.75m) last summer.

Liverpool have already made Mohamed Salah the most expensive signing in their history and they were prepared to do the same for Southampton defender Virgil van Dijk before being forced to step away from a deal. Pumping more money into the squad to sign Keïta would be a serious statement of intent from the club.

Leicester have reached an agreement to sign Sevilla midfielder Vicente Iborra, while Swansea have confirmed that Tammy Abraham has joined them on a season-long loan.

The 29-year-old Spaniard is now expected to meet Leicester officials to discuss a contract and undergo a medical. Reports have suggested Iborra, who played against the Foxes in the Champions League last season, will cost the English club around €13.6 million (£12m).

Iborra, who can also operate as a forward, has scored 30 goals in 172 games since joining Sevilla from Levante four years ago. He has won the Europa League three times and he captained the side last season. He has previously been linked with Sunderland and West Ham.

A statement from Sevilla read: “Sevilla FC and Leicester City FC have reached an agreement in principle for the transfer of Vicente Iborra.”

Once a deal is concluded, Iborra will be allowed to return to Sevilla to bid a public farewell to fans. Leicester have not yet commented on the development, although his arrival could now see Nampalys Mendy complete his move to Bordeaux.

Meanwhile, Abraham has completed his move to Swansea after signing a new five-year contract with Chelsea. The England Under-21 striker had options to join Newcastle and Brighton but opted instead to link up with his former youth team coach Paul Clement. Guardian service