Wayne Rooney in talks with Everton over return from United

Rooney has a year left at United and is intent on having £250,000-a-week wage matched 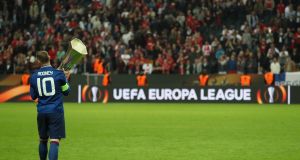 Wayne Rooney with the Europa League trophy which completed his set of all major trophies at Manchester United. Photo: Getty Images

Wayne Rooney is in advanced talks with Everton about rejoining his boyhood team with the potential move centring on the Merseyside club matching the £250,000-a-week basic salary he earns at Manchester United.

Rooney has a year left on his contract and is intent on having his wage matched. Everton are aware the 31-year-old has previously stated they are the only Premier League side he would leave United for and they believe this strengthens their position. Rooney’s only other option appears to be a move to Major League Soccer, where he could not earn as much, with interest from China fading.

United are due to fly to Los Angeles on Sunday to start their five-match, pre-season tour of America. If the transfer is not completed by then it remains in the balance whether Rooney will be in José Mourinho’s squad for the trip.

United could demand a transfer fee from Everton, yet because Rooney’s salary costs the club a minimum of £13m a year and this would be removed from the books, Ed Woodward, the executive vice-chairman, may decide to waive any sum or agree a reduced amount.

If Rooney does depart it will close a 13-year spell at United that has been supremely successful. The striker signed from Everton in August 2004 and has since won five Premier Leagues, the Champions League, the FA Cup, three League Cups, the Europa League and the Fifa World Club Cup. He is also United’s record scorer with 253 goals.