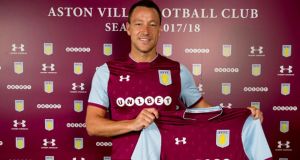 The former Chelsea and England captain John Terry has signed a one-year contract at Aston Villa. The 36-year-old defender left Chelsea at the end of last season following two trophy-laden decades at Stamford Bridge, which culminated in Terry lifting the Premier League title last season. He had hinted at possibly retiring in the wake of winning his fifth league title and also had offers to move abroad. Terry formally became a free agent on Saturday but has now decided his immediate future.

“I am delighted to join Aston Villa,” Terry said in a statement released on Monday. “It’s a club I have admired from afar for many years – there are fantastic facilities at Bodymoor Heath, Villa Park is one of the finest stadiums in the country and there’s a good group of players here, with an experienced and successful manager in Steve Bruce.

“I can’t wait to get started now and look to help the squad achieve something special this season.”

Terry’s contract is understood to be lucrative, especially by Championship standards, with the defender who made more than 700 senior appearances for Chelsea set to earn around £60,000-a-week (€68,000) at Villa.

Steve Bruce met Terry in Portugal last month and has since held a series of talks with the Villa manager, who made his desire clear to make Terry his first summer signing. The deal is a major coup for Villa, having beaten off competition from a number of other clubs – including West Bromwich Albion and Swansea City – to sign Terry. Midlands rivals Birmingham City also made Terry a contract offer, admitted manager Harry Redknapp.

“Suddenly he’s gone to our rivals but we made him a good offer early,” Redknapp said. “I would be a hypocrite if I said he was not a top player, Aston Villa have signed a top player. It was John’s decision and I respect the decision he has made. I have always been a fan of his, he’s an outstanding player and he has been a great captain. I am hoping to spread my budget over five or six [PLAYERS], rather than putting all my eggs in one basket over one player.”

Villa, meanwhile, also remain hopeful of sealing a permanent deal for the Manchester United goalkeeper Sam Johnstone, who spent the second half of last season on loan at the club.

Terry is expected to fly out to the Algarve to join his new Villa team-mates on the club’s pre-season training camp in Portugal, before the new season which begins at home to Hull City, Bruce’s former club, on August 5th. Bruce arrived at the club in October after a difficult start to life in the second tier under Roberto di Matteo and after finishing 13th last season, Villa are hopeful of gaining promotion to the Premier League this time around.

Chelsea announced in April that Terry would be leaving the club after last season, during which he made few appearances as Chelsea were crowned champions under Antonio Conte. Terry said he felt that he still had “plenty to offer on the pitch” and understood “that opportunities here at Chelsea will be limited”. Chelsea’s then statement also said the club would “look ahead to the possibility of him returning to us in a non-playing capacity, when he will be able to share his unparalleled experience with players, staff and fans alike”.