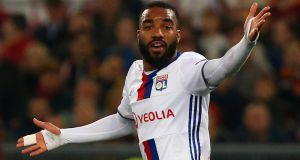 Alexandre Lacazette has completed his move from Lyon to Arsenal in a deal believed to be worth close to €50 million. Photograph: Alessandro Bianchi/Reuters

Arsenal have completed the signing of France striker Alexandre Lacazette from Lyon for a fee close to €50 million.

Lacazette netted 37 goals in all competitions last season and becomes the Gunners’ second major summer addition following the arrival of left back Sead Kolasinac on a free transfer from Schalke.

The fee was not disclosed in Wednesday’s announcement, which was made via a series of video posts on Arsenal’s official Twitter feed shortly after 5pm.

Lyon president Jean-Michel Aulas, though, had said it would be close to €50 million, which would surpass the €48 million the north London club paid to Real Madrid for Mesut Özil in 2013.

In the short video clip posted on Arsenal’s Twitter feed, Lacazette said: “It is me – Laca new signing.”

Arsenal confirmed Lacazette had signed on a “long-term contract, for an undisclosed fee”.

A statement on the club website added: “He is expected to travel with the tour party to Sydney this weekend and is likely to make his home debut in the Emirates Cup on July 29th or July 30th.

“The deal is subject to the completion of regulatory processes.”