Europa League: Cork and Rovers in the driving seat 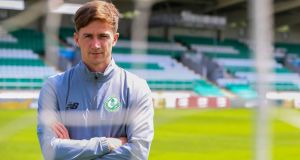 Ronan Finn: “I’m sure tomorrow night will be a great night for them and that emotion will spread onto the pitch to us.” Photograph: Oisin Keniry/Inpho

Rangers may have provided a timely reminder that just about anything is possible in Europe, but two of the Irish clubs head into Thursday’s second legs of Europa League’s first qualifying round in good shape to progress with Cork City and Shamrock Rovers leading their Latvian and Icelandic opponents.

“I think it is a different type of game now,” says John Caulfield, whose side enjoy a two goal advantage over Levadia Tallinn. “They know about us now and may change their formation.

“They need to come here and score to open the game up, so we need to manage the game properly. It is always a tricky situation because people may assume you are already in the next round, but you’re not and you have to approach the game properly.”

Caulfield is again without John Dunleavy or John Kavangh, while Alan Bennett faces a late fitness test. But all of the 14 players who featured in the first leg are available and despite the understandable caution, he will be hopeful that a decent sized Turner’s Cross crowd will help his side over the line.

Rovers have everyone available and manager although Stephen Bradley suggested that he might yet shake things up just a little for a game against Stjarnan, he wants his side to try and win despite their existing single goal advantage.

His opposite number, Runar Sigmundsson, insists his team, finally at full strength after a run of injury problems and with a cup win under its belt at the weekend, is confident that it can play its way back into the tie. But Ronan Finn reckons the special sense of occasion will see the Hoops through.

“You always get a little high coming into Europe,” Finn explained. “It’s kind of a feeling you get that’s hard to replicate all the time because the games are just that bit bigger, I suppose; they shouldn’t be, I suppose, but they potentially are.

“They are great games to play in and even for the fans, I’m sure tomorrow night will be a great night for them and that emotion will spread onto the pitch to us.”

Whether it is a great night for the fans, of course, largely depends on whether the team delivers but at least the Dubliners are in the driving seat.

Derry are effectively already beaten after the first leg which they lost 6-1 to Midtjylland and manager Kenny Shiels, frustrated that he could not add to his squad for these games because the window here did not open until after the first leg, will pick his team with one eye on Sunday’s league game against Sligo Rovers.

“It’s a terrible pity because we were all looking forward to Europe, but obviously it has not gone well,” he says. They were a better team than us, although we’ve been unlucky too and the league needs to look at the transfer window if it is possible.”

Aaron Barry is out the European game (which is at the Showgrounds) due to a hamstring problem while Rory Patterson and Barry McNamee may be rested to have them fully right for the league game. Up to five of those who feature, Shiels says, will have been playing Foyle Cup football this time last year.

1 Will the penny drop at Cork GAA over Mike Ashley?