On a scale of Roy Keane bust-ups, it’s a long way from Saipan 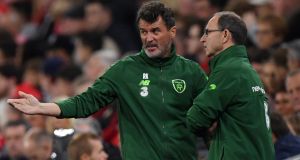 Poor old Ireland. Once upon a time, in-house bust ups starring Roy Keane carried sufficient weight to stop the country in its tracks. But there was something small and tragi-comic about Stephen Ward’s deadpan delivery of the verbal confrontation between Keane and two of the players whose international careers he is there to aid and facilitate. It’s hardly Ward’s fault that his WhatsApp phone call was recorded and, on Monday circulated, proving that footballers are as prone to a bit of juicy gos’ as much as the crew down the Rovers Return. But it’s also embarrassing for Ward and he can’t be relishing the next time he is going to have to look Keane in the eye.

The content led to instant speculation that Keane’s days as assistant manager – as opposed to assistant to the manager – were numbered. But O’Neill’s steadfast defence of the Cork man at Monday evening’s press conference in Wroclaw ruled out any dramatic exit. To begin with, the rows, with Jon Walters and Harry Arter, took place in the Ireland camp in early summer. The language, as delivered by Narrator Ward, is choice. But then, football dressing room language has always been fairly ripe.

None of it reflects well on Keane, portraying the assistant manager as riled and antsy, roaming the corridors looking for a cause to rebel against. The sight of Walters and Arter – “just relaxing and icing themselves and stuff” as Ward described them – was, in Ward’s telling, enough to cause Keane to blow a gasket. So he had what the football world likes to call ‘a go’, ragging on the two men for missing training, getting into an old beef with Walters dating back to their Ipswich Town days and drawing the undeniably marvellous retort from Walters: “Are you going to be a shit-house again?”

So far, so football, but to see Keane’s eye narrow and glint at this charge would have been special. The image of Keane goading a retreating Arter and calling him a pr**k and a c**t is not pleasant. Once the leaked tape was circulated, it led to instant condemnation from the moral brigade. But as O’Neill pointed out at a press conference which must have truly charmed and bewildered the Polish media gathering, Ward wasn’t actually there. What we were hearing was a particularly well rendered account: he is the Nelly Dean of this story.

And as O’Neill pointed out at an earlier press conference, he too has had a number of arguments with players “but they haven’t hit the headlines.” O’Neill accepted full responsibility for any criticism Keane had to make about the players before elaborating on the grand tradition of football managers ragging on players in order to improve their moral standing.

If you lay O’Neill and Keane down on a psychoanalyst’s couch (sessions they may wish for by the time they finish with Ireland) chances are that it wouldn’t take long for the presence of one Brian Howard Clough to fill the room. Both men came through football at a time when verbal violence was just part of the dressing room culture.

The prime of Keane’s career came under Alex Ferguson’s watch and the Scotsman is celebrated for his dressing-room tempests and rants. Keane’s playing career existed on an epic scale and the winning of English titles and chasing of European trophies, the winter hatred of Liverpool, of City, of Arsenal, of everyone, seemed to make those tantrums not just worthwhile but necessary.

This stage of his managerial life is being played out on a mediocre scale. He is assistant manager of a deeply ordinary international football team. And he is well paid to do that job. There was literally nothing riding on the Ireland football team this summer. Who cares if Arter and Walters were icing themselves down? It was a friendly game: the very kind of meaningless, pointless encounter that Keane actively loathed as an Irish player.

Watching his former Manchester United comrade and Ferguson fave’ Ryan ‘Giggsy’ Giggs stand on the sideline, looking sharp in his managerial debut as his Wales team destroyed Ireland last week can’t have improved Keane’s mood any. O’Neill won’t want to lose Keane – partly because he’s probably good, witty company through the dull stop-start nature of an international campaign – and partly because, for better or for worse, the Cork man is an integral part of his set-up. Whenever the Irish team takes the field, game and up for battle but often up against it, the only residual glamour and star-power belongs to Keane. At his best, he is someone that the players and the public can admire as one of the very greatest footballers that Ireland has produced. The sooner the real games get started again, the better.

For there was something haunting about Ward’s breezy sign-off, when he summed up the whole row as “basically just Roy losing his head”, as though he was a volatile if harmless uncle who occasionally threw a bender. Keane was too good a player and too important a figure to allow himself to be reduced to that in the eyes of the next generation.

1 The Game Changers: Vincent O’Brien, a pioneer who took Irish racing to the world
2 The unsolved mystery of Goran Ivanisevic’s stunning Wimbledon win
3 Pete Sampras: The forgotten great with the best serve in the business
4 Tipping Point: DeChambeau’s transformation raises questions, but who will ask them?
5 John O’Sullivan: IRFU must recognise vital role of clubs in rugby's return
Real news has value SUBSCRIBE
Crossword Get access to over 6,000 interactive crosswords