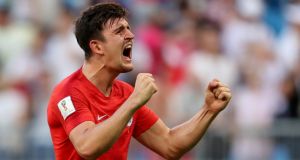 The 25-year-old joined Leicester from Hull in the summer of 2017, and played every minute of their Premier League campaign last season before helping England reach the World Cup semi-finals.

Maguire, who Manchester United were reportedly interested in over the summer, said on Leicester’s official website: “Ever since I came to this club I’ve always reiterated how good they’ve been to me.

“They gave me an opportunity to play in the Premier League and built a great platform for me to go and perform at the World Cup, so I thank them a lot. I owe them a lot, and I’m looking forward to the future.”

The news of Maguire’s deal through to 2023 comes the day after he won his 13th senior cap as England lost 2-1 to Spain at Wembley in their Nations League opener. He only made his England debut in October 2017, and was at Euro 2016 as an England fan.

Alex McLeish’s side lost 4-0 in their friendly against World Cup semi-finalists Belgium on Friday night, which was their biggest home loss in 45 years. The fixture acted as a warm-up for their first game in the newly-formed tournament, which offers an increased chance of reaching the 2020 European Championship.

With Scotland in a three-team group along with Israel – beaten 1-0 by Albania on Friday night – there is little room for error.

The 21-year-old Celtic left-back said: “We are all professional footballers, we know how important it is, we don’t really need anyone to tell us. It is really important. It is a home game as well, and we want to give the fans something to cheer about, which we didn’t do on Friday.

“It wasn’t good enough, and we have to make it right on Monday. This [competition] gives us more of a chance which is great. Every game is going to be important, and we will be looking for a great start on Monday.”

The Celtic left back was moved into a back three by McLeish, with new captain Andy Robertson deployed in his usual role. Tierney was diplomatic when asked what position he would choose.

“I have played there a few times for Celtic, so I am familiar to a certain extent and I am enjoying learning a new position as well. As long as you are on the park you do your best for the country.”