Equestrian: Breen and Springsteen on fire in Paris 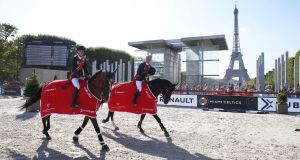 The Miami Celtics duo of Ireland’s Shane Breen plus the USA’s Jessica Springsteen won the Parisian leg of the Global Champions League on Saturday and the team now lies in second place in the League table, just three points behind the leaders, Shanghai Swans.

Going into Saturday’s second League competition in the French capital, where the Miami Celtics fielded just two riders with the same horses, Breen (Ipswich van de Wolfsakker) and Springsteen (RMF Zecilie) were in second place behind the St Tropez Pirates having been one of three teams to finish on a zero score following Friday’s first round.

On day two, the pair picked up just a single time fault apiece to win on two faults with St Tropez Pirates on four and Shanghai Swans on five (137.98). Prague Lions, who too were clear on Friday, also finished on five faults but the Jessica Kürten-managed team did so in the slower time of 144.72.

At the press conference, Breen commented: “There was a bit of pressure on us. Helena (Stormanns, team manager) said to us before we jumped that both of our horses were jumping good so don’t worry about the time, just jump the jumps.

“Jessie had a fantastic round which gave me some confidence. I did know she had a time fault and I knew the Swans were on five faults. I just trusted my horse to jump clear and worried about the time after. We got the job done and it is nice to go from fifth to second in the rankings so we can lift our heads a little higher.”

Later, Breen was one of seven riders who progressed to the second round of the Longines Global Champions Tour 1.60m Grand Prix de Paris but, with Ipswich van de Wolfsakker lowering three fences, the Tipperary native had to settle for seventh place. The first prize of €99,000 was won by Germany’s Christian Ahlmann riding Take A Chance On Me Z.

At Knokke in Belgium, the 1.55m Grand Prix was won by host country’s Dominique Hendrickx on Castor vh Molenhof Z (36.06) with Wexford native Bertram Allen placing third on GK Casper (36.98) and Tipperary’s Greg Broderick finishing sixth on Westbrook having had a fence down for four faults in 35.36.

Saturday’s best result for the Irish contingent competing at five-star level at Spruce Meadows in Canada came through Derry’s Jordan Coyle who, last to jump in round two, landed the 1.50m winning round competition on Elan Farm’s Picador.

“He’s unbelievable,” said Coyle of the 12-year-old Anglo European gelding on which he was bringing up a hat-trick. “I’ve never had a horse quite like him. He’s always ready to go and I can trust him to jump the jumps which makes my job easier.”