League of Ireland: Cummins set for Rovers debut while Delaney retires from game 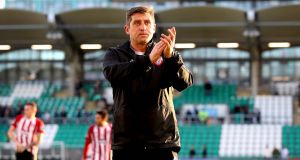 Derry City manager Declan Devine: ‘Dundalk are a fantastic side, possibly the best this league has ever seen.’ File photograph: Ryan Byrne/Inpho

After round trips to Cork and Dublin totally some 900 miles, Declan Devine wants his improving Derry City side to use the home comforts of the Brandywell to put it up to champions Dundalk tonight.

Derry beat Cork City 4-1 last Friday before having to settle for a 0-0 draw at Bohemians 72 hours later.

“We were excellent in Cork and although I felt the ludicrous amount of travel caught up with us in the second half at Bohs on Monday, we were full value for at least the draw there,” said Devine.

“Dundalk are a fantastic side, possibly the best this league has ever seen, and while a team like that demands maximum respect, we can’t stand and admire them.

“There is likely to be a full house at the Brandywell for the game and there’s nowhere we’d rather play than with that passionate support behind us.

“We’re steadily improving ourselves and this is an opportunity to see how far we’ve come against the best team in the country. That’s the challenge for our squad,” added Devine whose team, unbeaten in their last four league games, came from 2-0 down to draw at Oriel Park in May.

New signings Conor Davis and Darren McCauley, along with the returning Mark McChrystal, come straight into contention, though Patrick McClean and Michael McCrudden remain out injured.

With 12 wins from 13 unbeaten games, Dundalk, eight points clear at the top of the table, continue without Jordan Flores due to a hip flexor problem while they await international clearance for Andy Boyle. Jamie McGrath, Seán Murray and Patrick Hoban need to prove their fitness.

Graham Cummins, signed on loan last week from Cork City, is set for his Shamrock Rovers’ debut against Sligo Rovers at Tallaght Stadium.

A goalscoring striker is something most feel is what Rovers have lacked and Hoops’ fans hope Cummins is the answer.

“He’s hungry, he wants to win, he knows how to win,” said Rovers boss Stephen Bradley of his new recruit who scored 14 league goals last season and five this campaign in his second stint back at Turner’s Cross.

“We just have to create chances like we have been and hopefully Graham can put one or two of them away.”

Fellow new signing, midfielder Gary O’Neill, may also be in line for his debut, though winger Neil Farrugia (hamstring) is out while Aaron McEneff (quad) may not be risked.

Damien Delaney yesterday announced his retirement from the game at 37.

Capped nine times by the Republic of Ireland, central defender Delaney joined Waterford at the start of this season after he returned home in July 2018 to Cork City, where his senior career began.

He finished his 18-year career in England with Crystal Palace, for whom he made 130 appearances in the Premier League, having been an integral part of the promotion winning side via the play-offs in 2013.