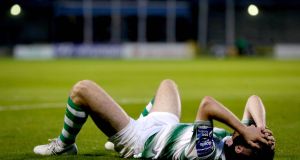 Shamrock Rovers missed out on a golden chance to close the gap at the top of the Premier Division table as they were held by a gutsy Sligo Rovers outfit at Tallaght.

With Dundalk dramatically dropping two points away to Derry City, the door was left open for the Hoops to increase the heat on their title rivals. However, despite creating a plethora of opportunities throughout the course of the contest, they couldn’t unlock the Sligo rearguard.

In the only change to the side that comfortably defeated St Patrick’s Athletic last Monday, debutant Graham Cummins led the hosts’ attack in place of Dan Carr.

The Cork man had a penalty claim turned down just shy of the half-hour mark, before he headed Greg Bolger’s inch-perfect delivery against the woodwork in the latter stages of the opening period. Sligo’s Ed McGinty subsequently turned away a Sean Kavanagh half-volley, ensuring his side remained on level terms at the break.

The Glasgow native came to the visitors’ rescue once again on the resumption - tipping over a spectacular long-distance drive by Jack Byrne - but Sligo remained resolute in defence.

In an attempt to inject fresh life into their challenge, Bradley introduced Carr and Gary O’Neill (a recent recruit from UCD) off the Hoops’ bench.

Both men went close to securing a breakthrough, while Cummins was also denied by an in-form McGinty. The home team continued to bombard the Sligo box as the final whistle approached, but they ultimately remain eight points adrift of the champions.

His team-mate Conor Clifford should have done better with the best chance of the opening exchanges.

Neat interplay by Simon Madden and Jake Walker on 26 minutes set up Clifford to shoot from the edge of the box but he could only fire his low effort straight at goalkeeper Matt Connor.

Dean O’Halloran, on his first start for Waterford since returning from a loan spell at Bray, scampered clear on the counter moments later only for Brendan Clarke to charge from his goal and clear the danger.

A spark was needed to ignite a dull contest and Cory Galvin provided it with the opener on the half hour mark.

Dean Walsh held the ball up for Galvin to arrive on the left and he turned inside onto his favoured right foot to sweep a drive from 20 yards across Clarke into the far corner.

The home crowd were still celebrating that breakthrough when Clifford changed the mood at the RSC.

With Waterford expecting Jamie Lennon to launch a 40-yard free-kick into the box, he instead rolled the ball into the path of his unmarked fellow midfielder. Clifford took one touch before unleashing a rising shot that sailed into the top corner.

Clarke went close to finding a second for the Saints approaching the break. Once again, Clifford was centrally involved with a deft pass to Madden. Clarke was first onto the cut-back, yet his first-time effort smacked off the near upright.

He wouldn’t have to rue that miss as Clarke got his angles right for the winner on 62 minutes.

Kevin Toner’s cross found the winger at the far post and, though his header rebounded off Georgie Poynton, he seized on the rebound to smash home from six yards and consign Waterford to a third defeat in a week.

Cork City kept a clean sheet against Bohemians for the third time in the league this season, but the Rebel Army are now six Premier Division games without a win after a second scoreless draw this week.

Having had a stalemate with Finn Harps on Monday, City had Karl Sheppard back from injury and new signing Joel Coustrain in the side as they sought to attack Bohs from the start. They did make the early running, Sheppard unlucky not to properly test James Talbot from a Ronan Hurley cross, while Dan Casey was denied by Darragh Leahy following a corner.

Despite bring on the back foot for most of the first half, third-placed Bohs had the best chance, just before half-time. After Danny Mandroiu and Luke Wade-Slater linked well, the latter crossed for Keith Ward at the back post but, despite a free header, he couldn’t find the target.

In the opening minutes of the second half, Cork’s Colm Horgan had a good opportunity when a Coustrain cross was only half-blocked and landed at his feet, however the wing-back skewed his effort high and wide. Immediately after, he met a Hurley cross but was unable to divert the ball goalwards.

Bohs full-back Paddy Kirk did well when a low Coustrain cross threatened danger in the visitors’ penalty area. However, though City brought on Mark O’Sullivan to begin his third spell at the club, Bohs began to enjoy the better of the play.

Sub Robbie McCourt fired a long-range effort over and another replacement, Ryan Graydon, was almost put through by a Mandroiu flick but Hurley defended well to deny him.

Leahy went closer than anyone as he met Ward’s corner but Mark McNulty showed good reflexes and the ball was cleared.

Late on, Ward and Gearóid Morrissey might have won it for their respective sides but the deadlock couldn’t be broken.

Their first points in 12 games edges the bottom-of-the-table Students to within a point of Harps who have played three games more.

Due to injuries and the exodus of key players, decimated UCD could name just one outfield player on their bench.

Despite their woes, UCD passed the ball well to stun Harps in taking an eighth minute lead for what proved the only goal of the game.

Danu Kinsella-Bishop put Jason McClelland in behind on the left and he advanced before drilling a crisp left foot drive from a tight angle to the far corner for a fine first goal of the season.

Though Harps showed more impetus from the resumption, it was 70 minutes before they created a chance.

Substitute Mark Timlin’s superb cross from the left was met by Daniel O’Reilly whose downward header was brilliantly parried away by Conor Kearns and cleared.