Palace facing a quandary as Zaha eyes move to Arsenal 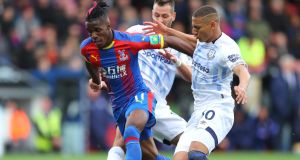 Ron Noades used to enjoy telling the story about the day a tearful Ian Wright pleaded with him to accept Arsenal’s offer for his star striker in September 1991.

“We’d had a bid of £2.5m, which was a hell of a lot of money back then,” said Crystal Palace’s infamous former chairman in 2012. “Ian came to my house in tears and asked me why we hadn’t accepted it. I remember it was a very emotional conversation in my kitchen but eventually I agreed to let him go.”

Wright completed his move to Highbury at the age of 27 after he had helped Palace to promotion via the play-offs before finishing third in the old First Division in their second season in the top flight, only 14 points behind the champions, Arsenal. Over the next seven years he went on to become the club’s all-time top scorer with 185 goals in 288 appearances to prove that it had very much been money well spent by George Graham.

Fast-forward almost three decades and the characters may have changed but there are plenty of parallels with the situation facing Palace and their latest talisman, Wilfried Zaha, this summer.

Noades – an often controversial figure who died in December 2013 – has been replaced by the co-chairman Steve Parish, who is recognised as being the man responsible for masterminding Palace’s emergence as an established member of the Premier League over the past six seasons, albeit largely due to the presence of Zaha – who also helped them win promotion in the first place, in May 2013.

Four months earlier he had signed for Manchester United for £10m but he spent much of the following two years on loan, partly at Cardiff but mainly at Selhurst Park.

Since his permanent return in February 2015, it is no exaggeration to say the player who grew up a stone’s-throw from the club’s ground has been the main reason the club he joined at the age of 12 are enjoying the most sustained period of success in their history.

Countless assists and a vastly improved return of 26 goals in the past three seasons have helped Palace finish 14th, 11th and 12th and cemented Zaha’s reputation as one of the best players outside the Premier League’s top six.

Then there is Arsenal.

They are no longer the force they were under Graham in 1991 and Unai Emery has reportedly been handed only £50m to replenish his squad over the next few weeks after the disappointment of failing to qualify for the Champions League, hence the derisory offer of £40m for Zaha this week that is said to have left Palace feeling “incensed”. That is less than half the value they place on the 26-year-old, who is currently on international duty with Ivory Coast at the Africa Cup of Nations.

Left out of the starting line-up by the coach, Ibrahim Kamara, for the opening two matches in Egypt, Zaha cut a dejected figure on the bench during Ivory Coast’s defeat to Morocco on the same day United reached a breakthrough in their negotiations with Palace over his close friend Aaron Wan-Bissaka. The sizeable fee – £45m up front and another £5m in add-ons – for a player who has made fewer than 50 first-team appearances is evidence that Palace drive a hard bargain and will not let their prized asset leave on the cheap.

Since that move back to south London on a permanent basis – a deal that also included a 25 per cent sell-on fee for United – Zaha’s outstanding performances have been rewarded with a series of improved deals that have taken his wages from around £30,000 a week to more than £120,000 a week.

Key to that process has been Parish, who – in contrast to Noades when he attempted to keep Wright – has been able to call upon the vast riches of the modern Premier League to help his cause, and his recognition that his star player held the key to survival every season.

The result has been a wage packet and contract that have so far dissuaded several interested parties, including Mauricio Pochettino’s Tottenham, from following up their interest, as well as helping Zaha to purchase Noades’s old house in 2015 for £2.5m – coincidentally the same amount Arsenal paid back in 1991 for Wright.

Having also featured in the television show Footballers’ Wives in the past, it’s not known whether the house’s swimming pool still has the Palace badge emblazoned on the bottom tiles as it did the day Wright visited all those years ago. But while the kitchen might not witness the same dramatic scenes this summer, the nagging rumours that Zaha was assured he would be allowed to leave this summer should a suitable offer be received have left Palace supporters fearing everything is finally coming to a head.

Many would not begrudge Zaha the opportunity to prove he belongs at a higher level after such committed service over the years – but they will also be concerned that Palace are not held to ransom for a player who has become so important.

The situation is complicated by the fact that Zaha is in Cairo with the Ivorian squad, out of reach of Parish, with the public statements of his brother Judicael Boris Rodrigue Inchaud this week apparently confirming his desire to move on to the club he supported as a child. Another brother, Hervé, played a role as a consultant for the agency that worked on Wan-Bissaka’s move to Old Trafford and has represented Zaha for several years.

They were instrumental in his 2013 move to United, when Sir Alex Ferguson was persuaded to make the then 20-year-old his final signing. Arsenal were also in the mix until Arsène Wenger balked at the prospect of increasing an £8m offer and loaning him back for the rest of the season, as United eventually agreed to do.

Whether they follow through their interest this time with a more serious offer will be intriguing, especially with continuing doubts over Mesut Özil’s future. But if they do, a once-beautiful relationship looks like it could be heading for an extremely messy and convoluted break-up.