Champions take the lead in the 91st minute but Junior earns his side a late, late point 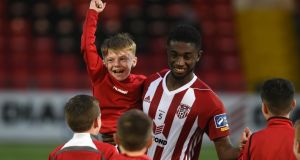 Colchester United loanee Junior Ogedi-Uzokwe was hailed a hero a the Brandywell, the tricky winger snatching maximum points away from Dundalk when netting a 94th minute equaliser for Derry City.

The champions had moved into a 2-1 lead in the 91st minute after having fallen behind to a David Parkhouse opening goal four minutes before the break.

And when Georgie Kelly equalised in the 57th minute, Derry hearts began to drop.

Not surprisingly, the Brandywell began to empthy when substitute Patrick Hoban headed home a Michael Kelly corner one minute into added time, but cometh the hour, cometh the man.

In fact, it was a similar situation in May at Oriel Park when these sides shared the spoils with the same scoreline. And it was a case of Lilywhites being stunned yet again having moved into the driving seat in the 91st minute.

Amazingly, Derry’s never say die attitude proved to be prominent yet again when Junior Ogedi-Uzokwe, pounced on a Jamie McDonagh corner to share the spoils in the final minute of added time.

Dundalk signalled their intentions when starting on the front foot, prepared to force the issue during the early stages and take the initiative away from the home side.

And that tactic saw the champions pen the home side into their own half during the opening 10 minutes, Derry having to defend in numbers.

Georgie Kelly headed a corner-kick straight into the hands of Peter Cherrie before Patrick McEleney let fly with one of his trademark efforts from 25 yards, the ball dipping over the crossbar.

Derry, however, finally settled and when Junior failed to make contact with a Darren McCauley cross, Dundalk breathed a sigh of relief.

McCauley, making his Derry debut, did well again minutes later when another low cross into the danger area found David Parkhouse but his shot was blocked by a defender.

In the 25th minute McDonagh broke on the right and his teasing cross saw Dundalk goalkeeper Gary Rodgers do well to palm the ball clear of Junior and, indeed, get down low to block another shot from the advancing Sloggett.

Derry settled and appeared content to hit on the break, but both teams continued to cancel each other out during what was a scoreless yet hugely entertaining opening period.

With four minutes remaining of the first half the commitment and enthusiasm of Junior to regain possession reaped handsome dividends.

The ball had been played back to Chris Shiels who appeared to dwell with his clearance and the alert Parkhouse challenged for possession before guiding theball wide of Rodgers and into the net, to the delight of the home faithful.

That goal will have altered Declan Devine’s half-time time talk and the home side appeared to have dropped back during the early stages of the second period.

In fact, in the 50th minute Dundalk’s lively left winger Michael Duffy headed the ball into the Derry net but the goal was ruled out for offside.

However, Dundalk’s determination was rewarded in the 57th minute when striker Georgie Kelly steered Duffy’s low cross beyond the reach of Cherrie.

Indeed, Shiels made amends for his first half error when winning possession in midfield before driving forward to set Duffy on his way.

The goal certainly saw Dundalk grow in confidence and a double substitution in the 75th minute, with both Hoban and Jamie McGrath entering the fray at the expense of Kelly and Benson, told its own story.

And McGrath made an immediate impact, his header, following a superb run and cross from Sean Gannon, touched over the bar by ’keeper Cherrie.

As the game entered four minutes of added time Hoban, so often the destroyer of Derry in previous seasons, struck yet again when he rose majestically to meet Duffy’s corner and head the ball firmly home.

But Derry won a 94th minute corner and when McDonagh again floated over a dangerous cross Junior rose to meet it, and while his header may have been deflected, the ball crashed into the Dundalk net.