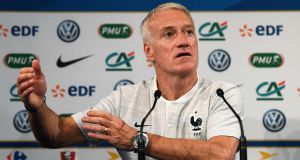 Didier Deschamps: France’s head coach has been able to make big calls because of the remarkable array of individual talent available to him. Photograph: Franck FireAFP/Getty

The wider country may be locked in a battle just now over the attempt by its president to impose what is politely described as reform but as Didier Deschamps prepares to take his France team to Russia, the manager has been the architect of a quiet revolution.

Just six of the squad that went out of the World Cup to Germany in Brazil and nine of the group that came within a whisker of winning Euro2016 on home soil have made the plane for Russia.

One or two of those who haven’t made the cut on this occasion have not taken the news lying down but Deschamps’ hand only appears to have been strengthened by the firm way he dealt with Adrien Rabiot’s refusal to be on standby.

There is little prospect of those who have been included doing much to express solidarity with the PSG midfielder who, almost everyone agrees, has not done enough on the occasions he has played for the national team, to give himself much to complain about.

Rabiot, in any case, must surely not be alone in feeling aggrieved. In a world where people suggest you should look at a manager’s bench to estimate the true strength of the hand he is playing, take a moment to glance over the list of those who have agreed to leave their mobiles on between now and the squad’s departure date.

Barcelona’s Lucas Digne, Bayern’s Kingsley Coman and Anthony Martial of Manchester United are just three of the 10 and that’s after Dimitri Payet and Laurent Koscielny were ruled out by injury and Deschamps maintained his position, also generally well received, of excluding the man who scored the first of Real Madrid’s three goals in Saturday’s Champions League final, Karim Benzema.

If those lurking in the long grass lest this France team falls flat on its collective face ever get to come out and tackle the manager, one thing’s for sure, they will be pretty well armed.

Deschamps, though, has been able to make such big calls because of the remarkable array of individual talent available to him. Players like Samuel Umtiti, Raphael Varane (who actually missed the tournament through injury) and Antoine Griezmann have all grown in stature since Euro2016 while the rate at which the likes of Corentin Tolisso, Ousmane Debélé and Kylian Mappé have acquired so much has ensured that there was simply no alternative but to make space for them in the squad.

There are imponderables, most obviously Paul Pogba, the spectacular talent who blew so hot and cold two summers ago that he threatened, it seemed, to destabilise the entire campaign at one point because Dechamps had come under such intense pressure to get the very best out of him.

And not everyone is convinced with Age Hareide, manager of Denmark, who the French will face in their third group game, sufficiently unconcerned about the danger of offering hostages to fortune, that he last week described the French team as “nothing special”.

Martin O’Neill seemed genuinely taken aback by the comment when it was put to him by members of the local media at the pre-match conference at the Stade de France on Sunday and respectfully disagreed with his old friend.

He pointed to an almost unbroken pedigree stretching back to the side led by Michel Platini, the major successes since and the quality of the current squad before rating their chances of marking the 20th anniversary of their triumph on home soil with another World Win in Moscow as “as good as anybody’s”.

Still, Hareide, might cite some of the numbers from the qualifying stages as evidence to back up his assertion. France won a group that also included the Swedes and Dutch with just 23 points, the third lowest total of nine; the likes of Germany, Portugal, England and Spain all conceded fewer goals while Belgium, who also let in six over their 10 games, scored comfortably more than twice as many.

Their failure to manage even one in Belarus in their opening game might have played a part in undermining the manager had the team not gone on a run of victories, two of them against their main qualification rivals, that was only ended the following summer in Stockholm.

Still, there was the embarrassment of another scoreless draw here in Paris against Luxembourg last August and so their ability to consistently generate goals remains a concern.

Having at least kept a clean sheet that night, the focus more recently has been on the team’s defence with the four goals conceded in the March friendlies against Colombia and Russia raising new questions that Deschamps will see this evening’s game against Ireland as an opportunity to address.

His back four, indeed, is probably the least settled part of his team selection for the three games in Russia although a certain amount will depend on whether he opts for 4-3-3 in Russia or 4-4-2 as he has done on several recent occasions.

The former has been the more familiar with N’Golo Kanté sitting between one of the few likely survivors this evening from the win over Ireland in Lyon two years ago, Blaise Matuidi and Paul Pogba, who is not generally expected start against Martin O’Neill’s side.

Up front, Griezmann plays as the second striker or on left of a three that is completed by Olivier Giroud and Mbappé; that’s two of the world’s most expensive players and one who manages to divide opinion whether playing for club or country but has still managed 30 goals in 76 appearances.

One of those who might like to see him gone asked Deschamps on Sunday why he did not simply replace the Chelsea player in the number nine with Mbappé who, at just 19, has certainly shown he can play there. Why waste his multitude of talents on just one role was the tone of the response.

His confidence, it would seem, endures but over the next six weeks or so we will see if the man celebrated for being the “water carrier” in a truly great France team has finally figured out how to get the return required from the more extravagant array of skills currently at country’s disposal.