A game of tears in bonkers Champions League final

Liverpool manager Juergen Klopp says his side wanted everything but ended up with less than nothing after an unfortunate loss Saturday (May 26) to reigning champions Real Madrid also saw star player Mohamed Salah injured early in the game, 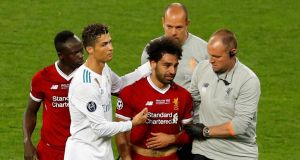 Liverpool’s Mohamed Salah with Sadio Mane and Real Madrid’s Cristiano Ronaldo as he is substituted after sustaining an injury. Photograph: Phil Noble/Reuters

Well, that was stupendous, in a completely bonkers kind of way. From the highly ridiculous to the utterly sublime back to the outright absurd all over again, there was a sprinkling of everything in the Champions League final.

Although one moment stood out above all the rest, Zinedine Zidane’s reaction to Gareth Bale’s first goal. And when you leave Zinedine Zidane in a state of OMGness, when he delivered more than a smattering of it back in the day, you know you’ve just scored one for the ages.

On the other hand.

‘Loris Karius has a chance to add his name to Liverpool’s European story,’ was the headline in an English newspaper before the final. The poor lad did just that. And even though he wears his hair in a bun, you’d want to be a ruthless bugger not to wish that his wish came true: that the Kiev earth beneath his feet would open up and devour him.

Glenn Hoddle doesn’t often find the apt-est of words for major moments in footballing contests, but he did this time on BT. “Oh dearie me.” Twice.

Back on RTE Eamon Dunphy was reluctant to say I told you so, but he did any way. Before the game he’d said that he didn’t think any team containing Karius could win against a side featuring Ronaldo, Benzema and the like, a forecast that convinced most of us that the German lad would go on to win Liverpool the trophy by saving every Madrid effort in a penalty shoot-out.

But his night was marginally less successful than that.

Over pictures of a grief-stricken Karius, in tears as he nervously approached the Liverpool fans and signalled his apologies, Eamon told us that “he drives around in a car with an LK1 reg, he’s a big star in his own head”. And “you need standards in football at this level and this guy doesn’t match them”. There might be a reason Eamon doesn’t offer counselling services to those suffering from low self-esteem.

It was our third helping of tears through the evening. It might have been four, but Ronaldo just about managed to fight them off and look half happy for Bale when he scored his wonder goal.

It started with Mo. As the planet held its collective breath waiting to see if Salah would be okay to carry on, Glenn left us fearing the worst when he shared his expertise in bodily functions. “A shoulder injury is not something you can run off,” he told us. That might have seemed logical enough, the shoulder not being attached to the legs, but still, it heightened the sense of dread that the occasion was about to robbed of the little treasure. It was too, Salah departing the scene. He wasn’t the only one in tears, half of Merseyside, all of Egypt and anyone with a heart in floods too.

Hands up all those who wanted the final abandoned at that point and rescheduled for whenever Mo’s shoulder heals? Landslide.

And then Dani Carvajal banjaxed his hamstring and he was gone too, inconsolable as he limped away. Never mind Mastercard, Kleenex missed a trick not sponsoring the night that was in it.

Scoreless at half-time, but then. “It’s a complete brain freeze,” as BT’s Darren Fletcher described the first of Karius’s moments from hell, but Sadio Mane soon equalised so all was well. Earlier, incidentally, Darren had told us a “fascinating” story about Sadio. “When Liverpool won the Champions League final in 2005, Mane watched it in a Senegalese village!” To which earth replied, he was 13 and lived in a Senegalese village, where else would he have watched it? The King Charles pub on Liverpool’s Grasmere Street?

And then, in the year of our Lord 2018, May 26th . . . Gareth Bale. and all you could say, really, was Good God Almighty. Kind of like an airborne Rudolf Nureyev, but with a better touch,

Eamon invited anyone who wanted to see a Champions League medal to come along to Lillie’s where, he said, Didi Hamann would be bringing his. There might even be a jar or three up for grabs. Somewhere in Kiev, you’d suspect, Loris Karius was drinking to forget.

Wembley is the sole focus for Leicester and Aston Villa 22:30
Youthful Arsenal secure passage into FA Cup fifth round 22:29
Castleknock stand firm to repel Roscrea’s comeback 20:54
FA Cup draw: Man United could face Wayne Rooney’s Derby 20:05
Gary Lineker: ‘60 is just a number, 70 is the one to worry about’ 19:30