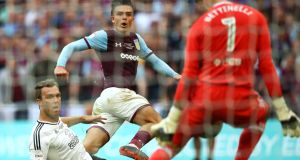 The deafening sound as Fulham celebrated promotion under the Wembley arch gave a whole new meaning to white noise, for Slavisa Jokanovic’s slow-burning, swaggering side had finally got over the line.

A couple of months ago, Jokanovic had insisted that dreams were to be had in the bedroom but he woke with his team triumphant and many topless at the end of Fulham’s first game at the national stadium since 1975.

His players, showered in gold confetti, guzzled champagne as they bounced on a hastily erected stage still feeling the effects of the mass pile-on at full-time.

The often ice-cool Jokanovic erupted with joy, thumped the air with both fists, later hoisting the trophy airborne while Shahid Khan, the Fulham owner intent on buying Wembley for £900m, puffed his cheeks.

Victory was theirs, Wembley possibly his. Khan, who is worth around £7bn, moved from Pakistan to the United States with $500 in his pocket and here Fulham exited with a jackpot that could be worth £280m if they stay up next season.

For now, as Jokanovic said when asked about the future of Ryan Sessegnon and retaining on-loan striker Aleksandar Mitrovic, it is all about enjoying what his attacking team have achieved.

This fearless, rip-roaring Fulham team, along with the champions Wolverhampton Wanderers, will reinvigorate a Premier League that has grown a little tired and musty. Promotion is vindication for the glorious front-foot manner in which Fulham have flummoxed countless teams this season. They will do the same next season but they are not naive.

“We must try to dominate against teams we think we can but we must be realistic in the future,” Jokanovic said.

The risk, as typified by Denis Odoi’s wild kick on Jack Grealish to pick up his second yellow card, is that they can sometimes overindulge but they are mightily good fun. Tom Cairney, the twinkling Fulham captain, just about held back the tears in interviews pitch-side.

“After we missed out on promotion last season, a lot of people wrote us off,” he said. “We got a lot of stick. But football won today. Football won.”

Ryan Sessegnon set up Tom Cairney for the only goal of the Championship play-off final with a brilliant assist.

Cairney harnessed his role not only as the team’s protagonist but its artist too – probing, prowling, twirling away from challenges, stroking passes across the canvas and, ultimately, adding that all-important finishing touch.

Before Cairney slotted home, time appeared to stand still as he readied himself to meet Sessegnon’s cute, weighted ball. For a team that froze on the final day of the regular Championship season, in turn forcing them into the play-offs, they displayed enormous steel, fight, and plenty of personality here.

Much of the talk in the build¨ up to this match had revolved around Villa’s big-game experience yet Fulham showed they have anything but a soft underbelly.

They were perfectly capable of time-wasting and utilising other dark arts, just like the rest of them. Mitrovic, one of three key January signings, put in another classy performance too, summed up by a sublime touch to control Tim Ream’s pass.

How other clubs must wish they had pushed the boat out as Fulham, then languishing in mid-table, did to land Mitrovic from Newcastle United, as well as Matt Targett from Southampton.

Any worry that Fulham would buckle at the thought of the occasion or wilt under pressure evaporated.

“We must adapt ourselves and know what is ahead; we must know it is the Premier League, the best and most competitive league,” Jokanovic said. “We must adapt and be clever, we must not make one step back. To show ambition we are going to need to show the money too.”

Sessegnon, who turned 18 this month, has been rightly lavished with praise all season. Yet on the opposite flank, Ryan Fredericks was again mightily impressive, with both occasionally helping out the other to double up on Albert Adomah and Robert Snodgrass. Between them, they gladly hoovered up danger and it was only Grealish, the dancing Villa playmaker who Fulham failed to mute. His bewitching second-half surge upfield did deserve to finish with the ball rippling the net.

Other than that, Villa asked few questions, by which point Fulham had answered all those thrown at them. The exciting thing is the project Jokanovic referenced in his post-match comments is just beginning for this Fulham side.