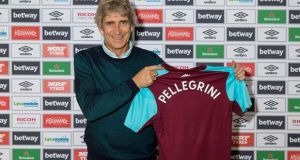 Manuel Pellegrini has been announced as West Ham United’s new manager after holding talks with the club’s co-owner David Sullivan in London on Monday.

Pellegrini has agreed a three-year deal worth £7m a year with West Ham, who parted company with David Moyes last week, and it is understood that the Chilean will be given full control of transfers by Sullivan, who had announced his intention to appoint a “high-calibre” appointment after the departure of Moyes, who walked away after the club openly began speaking to other candidates for his job. West Ham’s first choice was Rafael Benítez but they were forced to make alternative plans after seeing the Spaniard was minded to stay at Newcastle United.

That led them to Pellegrini, who had spent two years working with Hebei China Fortune. The 64-year-old has Premier League experience and led Manchester City to the title in 2014. He flew in from China over the weekend.

Sullivan said: “I am delighted to welcome Manuel Pellegrini to West Ham United. He is one of the world’s most respected football coaches and we look forward to working with him.

“It was important that we appointed someone with knowledge and experience of the Premier League, who already has an understanding – not only of the teams and players we face – but of West Ham United and our ambitions.

Sullivan said that Pellegrini’s style of football and ability to lure players to West Ham was also a factor in the club’s decision. “Manuel brings a reputation for attacking football and getting the best out of his players. We believe he will attract new talent to the London Stadium as well as improving the current squad.

“Above all, he is a winner, who knows what it takes to succeed at the highest level and is driven to continue that success. Manuel is the first West Ham United manager to have a Premier League title on his CV, and we believe that his experience, quality and proven record of taking teams forward quickly will ensure that he is successful here.”

West Ham are looking to revamp their recruitment director and are interested in appointing Málaga’s Mario Husillos as their new head of recruitment. The Argentinian worked with Pellegrini at Málaga. However, Leicester City’s Eduardo Macia is another candidate for a role which has been vacant since Tony Henry was sacked in February. – Guardian service