Liverpool manager Juergen Klopp says his side wanted everything but ended up with less than nothing after an unfortunate loss Saturday (May 26) to reigning champions Real Madrid also saw star player Mohamed Salah injured early in the game, 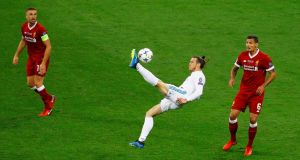 The Wales international, the first British player to score a winner in the European Cup final since Liverpool-born Peter Withe in 1982, produced an influential 29-minute cameo in the 3-1 victory which was a horror show for Reds goalkeeper Loris Karius.

Out-of-form Karim Benzema was gifted an early second-half goal when he intercepted a Karius throw, poking the ball into the net – and although Sadio Mane quickly equalised Bale struck twice.

The Wales international’s first goal was sublime and in many ways reminiscent of his manager Zinedine Zidane’s goal which won the 2002 final, but his second was pure comedy as Karius let a 30-yard strike slip through his fingers.

It was a devastating blow for Jurgen Klopp’s side, who lost Salah to a suspected dislocated shoulder midway through the first half.

It was heartbreaking for Liverpool who had made all of the early running with half-chances for Mane, Roberto Firmino and Trent Alexander-Arnold until the loss of Salah when Sergio Ramos kept hold of Salah’s arm as they fell to the ground.

Salah remained motionless, left arm outstretched, and despite trying to return eventually departed a couple of minutes later in tears after a comforting word from team-mate Mane and Ronaldo.

There was anger and shock from Liverpool fans inside the NSC Olimpiyskiy Stadium, while Egyptian fans held their breath with a first World Cup match in 18 years just three weeks away.

Defender Dani Carvajal, who had been struggling in the warm-up, also left the pitch in tears moments later after injuring his ankle but it hardly redressed the balance of Salah’s absence.

Real thought they had taken the lead just before half-time when Benzema, preferred to Bale, turned in from close range after Ronaldo’s header was parried by Karius – but an offside flag cut short the celebrations.

Early in the second half Lallana’s miscontrol teed up Isco and although he beat Karius the ball rebounded off the crossbar.

Karius was embarrassed minutes later, however, as he tried to quickly release Dejan Lovren with Benzema in close proximity and the Real striker’s decision to stick out a boot paid off handsomely with the 51st minute opener.

The goal was still being debated when Mane equalised from close range four minutes later, after Lovren’s header from a James Milner corner.

Karius turned Isco’s shot wide but he was helpless with Real’s next effort as substitute Bale produced an unstoppable world-class overhead kick which dropped just under the crossbar in the 64th minute.

Zidane stood and applauded and he was joined by thousands of Liverpool fans filling almost three-quarters of the ground who, despite the cruel blow, appreciated the quality.

Mane struck the post as Klopp’s side rallied, while Andrew Robertson’s brilliant last-ditch tackle denied Ronaldo a certain goal which would have ended the match there and then.

Karius blocked Benzema’s effort as time ticked down but the goalkeeper was at fault once more seven minutes from time as he allowed Bale’s 30-yard strike to slip through his hands. Victory was Madrid’s – again.

1 Gordon D’Arcy: If Farrell can tap into our self-worth, we’re all on a winner
2 Winds of change as Ireland name a refreshed team, picked on form
3 Who is Caelan Doris? Meet Ireland’s newest rugby star
4 Nike Vaporflys won’t be banned but regulations will tighten
5 Seán Moran: Election fever a reminder of the GAA's fertile political soil
Real news has value SUBSCRIBE