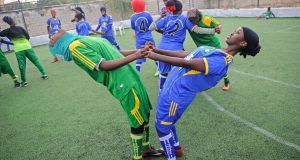 The head of women’s football in Somalia has urged Fifa to take action after claiming money made available by the world governing body to support the women’s game in her country is not reaching its intended target.

Shaima Mohamed, who has been almost single-handedly pushing the cause of women’s football in one of the world’s most volatile nations, told the Guardian: “I have no idea where the money goes.”

Mohamed believes federation members are unwilling to back the women’s game because they fear extremists who oppose it. “[They] would have sat down and talked about it and I think they are scared for their lives,” she said. “But they are also responsible to help Fifa’s vision for women’s football.”

The women’s football department at the Somali FA is in effect inactive. Mohamed said the federation gave her an official title but turned down her request for an office, equipment and a rent-free field for training. Girls and women continue to play, notably at the Golden Club academy in Mogadishu, which Mohamed founded and runs.

“We do fundraising to support the teams,” she said. “We do social media campaigns. We get contributions from the community but we don’t have a specific budget that comes to us every year. I have no idea where the money goes. I have no idea if the federation has sent details of my role and information to Fifa. We need formal recognition for Somalia women’s football.”

She called on Fifa to step in. “They should do more to ensure we are receiving our funding,” she said. “Fifa needs to do more accountability with every federation in Africa to see if the women’s funding is being spent on women’s football or something else.

“Fifa could also do more by improving direct communications with the women’s football department. I understand the federation can’t do much for women’s department since they are scared for their lives but they can give us a little support until we can stand on our feet because we are willing to take the risk and we are ready to fight for what we want.”

A Fifa source told the Guardian that it had been made aware of the issues and would be making efforts to meet Mohamed to discuss the situation.

“The Fifa administration is already working closely with the Somali football federation (SFF) to help grow the women’s game in Somalia by respecting the local cultural context whilst enabling more girls and women to play football in the region,” Fifa said. “Further meetings are planned in the new year together with the SFF and the Fifa member associations and women’s divisions.”

It said its commitment globally to women’s and girls’ football was demonstrated by a 20 per cent increase in its Forward development fund for 2019-2022 to $6 million, which includes “a total investment of at least $150,000 per year per member association dedicated exclusively to women’s football development”, in addition to funding available through infrastructure and travel budgets.

Mohamed’s frustrations were encapsulated after Golden Club were invited to send a team to the Human Rights Cup in South Africa last month to represent Somalia. “We couldn’t make it because we lacked financial support from both the federation, where the women’s department is not active, and the government. We trained for months to prepare for the cup. We were so disappointed. Discrimination holds us back.”

Mohamed, who grew up in Kenya, has been battling to establish women’s football in Somalia since she moved back in 2015, aged 19. “There were no women playing football so I decided to form a group I could play with,” she said. “It became an organisation. I had to open up an academy so that more girls could be inspired and empowered.”

Initial approaches to the Somali FA for support had been promising. “At first the president of the federation welcomed me. He took me to the African football symposium on women’s football in Morocco earlier in 2018. It was the first time a woman from Somalia had attended such a conference.”

On her return she says things changed: “I was given the official title of head of the women’s department. I asked for an office, equipment, a place to work, but the president told me to focus on the academy until people get used to what I am doing.

“I approached him again and asked for a field to train the girls because there is a lack of fields or stadiums available to women. I asked him to give us time for training and he said the country is not safe enough and said we should rent another field and they will pay for it, except that didn’t last. It felt like they didn’t want to give us help.”

Golden Club continues to thrive despite the difficulties. “There are a lot of young girls that are so talented but it can be hard for them since they don’t have the self-confidence to come out and play football because they feel scared of society. After I created the first women’s football club in Somalia I learned that football can play an important role to help women and girls build their self-confidence.”

The civil war and the presence of groups such as al-Shabaab harmed men’s football too. “The extremists didn’t allow men to play football. Sometimes they used to play in a tribalism way – one tribe would play another. Now youth are engaged, there are leagues and they have even started to participate in international tournaments.”

What keeps Mohamed going is her passion for the game and determination to do something positive for girls who contact her. “But I can’t even offer the financial support in my city, let alone go to another region. The change that needs to be made is we need fields that will be secure for the girls and we need awareness.

“Women’s football is more than just sport. We use football to fight early marriage and to fight for women’s rights in society. This is important for so many girls and women in Somalia. I am fighting for their future and I will never give up.”