Vinny Perth wants Dundalk to invoke spirit of 2016 in Tallaght 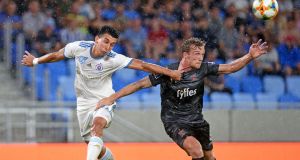 One-nil down from the first leg, Dundalk will be looking to invoke the spirit of 2016 when they meet Slovan Bratislava in their Europa League third qualifying round tie at Tallaght Stadium on Wednesday evening.

It’s just over three years to the day since the Lilywhites overturned a one-goal deficit against Bate Borisov at the South Co Dublin venue and secured a place in the Europa League group stages.

It’s a famous night that will never, ever be forgotten in the Border town, and Vinny Perth has called on his players to seize the moment and create their own magical European memories.

“I never want that night in 2016 to be forgotten because, personally, it’s still one of the highlights of my career, but I feel that this club has special European nights ahead,” he said.

“We can take inspiration from it but these players have their own dreams. The likes of David McMillan, Robbie Benson, Andy Boyle and Dane Massey will never forget that game against Bate, but it’s up for somebody else now to make themselves a hero.

“It won’t be easy,” he added. “The game is right in the balance. I said it was a fifty-fifty game and I still feel that, but I believe this team has big nights in it and this is the chance for some of them to shine and become a hero.”

With no away goal to call on, Dundalk, who will once again be without the injured Robbie Benson, know that keeping the back door shut is imperative if they are to see off the Slovakian champions and set up a play-off round shot at either PAOK or Ajax.

We don’t need luck tomorrow, we need to play at our ability and have a big performance

“We’ve never gone gung-ho,” said Perth. “We didn’t come out against Bate in 2016 with two strikers up top and wingers flying all over the place. I was part of that coaching set up and part of the tactical decisions made around those games. People sometimes look back with rose-tinted glasses.

“We have to be pragmatic. We’re operating at a really high level. We don’t need luck tomorrow, we need to play at our ability and have a big performance. It’s a massive challenge but I think this group can achieve what they need to achieve.”

Perth and his players can take heart from the first leg at the Tehelné Pole last Wednesday where Dundalk created a number of clear-cut chances, the best of which saw John Mountney go agonisingly close to snatching an away goal in stoppage time.

“We created opportunities and we had the ball for long periods, but we probably need to be braver as a team and be willing to take chances higher up the pitch,” said Perth.

“We’ve had issues going forward,” he added. “We’ve had the heart of our midfield ripped out all season long, but you saw last week that we had a balance there with Chris Shields, Sean Murray and Jamie McGrath that helped certain things.

“It’s something we’ve been working on and it’s a challenge we’ve set the players for tomorrow night. They need to be brave.”

5 Joey Carbery set for Munster return against Cardiff on Friday