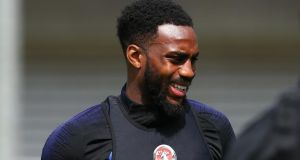 Danny Rose has revealed he suffered depression which he believes was triggered by the treatment of a knee injury coupled with family tragedy. In an extraordinary interview days before he travels with England to the World Cup, the Tottenham left-back said he lost track of the number of times he was injected with blood-spinning and painkilling drugs.

The 27-year-old’s mental health deteriorated as he contended with the triple trauma of his uncle killing himself, his mum Angela being racially abused and an assailant shooting at his brother inside the family home.

Speaking for the first time about the illness that he said left him unable to get out of bed and on medication for months, Rose described how his time inside the England set-up became an escape as he grew increasingly miserable and isolated at White Hart Lane.

“It’s no secret that I’ve been through a testing time at Tottenham this season,” said Rose, who is set to start England’s final warm-up match against Costa Rica, on Thursday. “It led to me seeing a psychologist and I was diagnosed with depression, which nobody knows about. I had to get away from Tottenham.

“I’m lucky that England gave me that opportunity to get away, refresh my mind and I’ll always be grateful to them. I was on medication for a few months – nobody knows about that apart from my agent – but I’m off the medication now, I’m good again and looking forward to how far we can go in Russia. ”

Sitting behind a desk at England’s St George’s Park training base, Rose spoke freely and largely unprompted about his illness.

“Nobody knows this either, but my uncle [his father’s brother] hung himself in the middle of my rehab, and that triggered the depression as well,” Rose said. “Off the field there have been other incidents: back home in August my mum was racially abused in Doncaster. She was very angry and upset about it, and then someone came to the house and nearly shot my brother in the face – a gun was fired at my house.

“England has been my salvation, and I can’t thank the manager and the medical staff enough. It was really hard, and being referred to a doctor and psychologist by the Spurs club doctor helped me massively to cope. I haven’t told my mum or my dad, and they are probably going to be really angry reading this, but I’ve kept it to myself until now.”

Rose pinpointed the treatment of a knee injury suffered in January 2017 as the beginning of his strife. He was advised he did not require an operation but when he returned to training in May that year he experienced pain and was recommended to have surgery. In total he was sidelined for eight months and it took a toll.

“I had to have an operation four months down the line – after all that football I missed, when the team was flying and I was playing really well, the team were playing really well. Seeing the lads beat Arsenal comfortably, seeing them beat Man United comfortably, it was hard. I’m not saying I’ve had worse treatment than anybody else. That’s football. But it was difficult – that was the start of it.”

Rose made only 17 club appearances last season because of injury and then failing to dislodge Ben Davies. “I think it’s fair to say I’m the luckiest player to be in the squad.”

Last summer he was disciplined by Tottenham after saying the players were underpaid and the club needed to bring in big-name signings and “not ones you have to Google”. There have been strains since then.

“Things were said and things happened behind the scenes at my club, and I don’t want to go into any detail because I’ll end up being fined again.”

Rose had wanted his family to join him at the World Cup but has warned them not to travel over fears for their wellbeing based on a history of racially-motivated attacks.

“I’ve had to tell the family I don’t want them coming out to Russia because I’m worried about their safety. That’s going to affect my preparation for games if I’m worrying about them and that’s such a sad state of affairs.”

He said his father, whose commitment to watching him extends to getting home at 3am from games at Wembley and being up at 7am for work, was “really upset”.

He said the England squad have held a “group discussion” about how they might react if subjected to racial abuse during a game.

“If it happened to me at club level I would walk off the pitch and I’d retaliate. But doing that on the world stage, it could cost us three points or going through to the next round. If it happens I will go to Harry Kane as captain first, and he will deal with it.” - Guardian service