Damien Duff: ‘I was six stone and whiter than that wall, but I was Romario’

As Duffer prepares for Russia, he remembers watching the World Cup as a boy 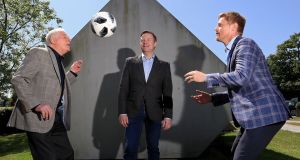 All but Liam Brady are present. It is RTÉ’s World Cup launch and the promise of 64 live matches from Russia – 160 hours of the beautiful game over 32 days.

For some, such big numbers could represent a waste of a summer.

But Duff is unapologetic. His World Cups have been romantic involvements with teams and players. It is, he says, a tournament of memories and personalities, where kids can go in and get lost and come out the far end enriched.

That’s what he did 28 years ago for the 1990 World Cup. The kid from Ballyboden was not for turning after that, and he brought Roberto Baggio to the streets of Dublin for the summer.

“I just fell in love overnight,” he says. “My No 1 moment, it was Roberto Baggio’s goal against Czechoslovakia. He played a one, two, drove down the line. If you remember, there was a shimmy at the end of it. I still think about it now.

“I love that as much as playing in the World Cup. That’s just the fan in me, the kid in me. I fell in love, if I wasn’t already in love with football. I fell in love overnight just watching that goal.”

Four years later, in 1994, Baggio had been discarded. Kids can be promiscuous with their heroes. A new man on the block, Romario, emerged to prove that World Cup greats can have only one name and there can only be one every four years. Duff was no longer Italian but Brazilian.

“The summer of ’94 I was six stone with scraggy hair and whiter than that wall there,” he says. “But I thought I was Romario for the summer. That’s who I was when I played out in the street. I was always trying to toe-poke finish. That’s the beauty of the game, the biggest football tournament in the world.

“Kevin Sheedy was a god in my house. They were all gods. Did I pretend to be one? No. I was still thinking I was Romario that summer.”

Duff blames “Ronnie [Whelan] and that crew” for stirring ambition in him and the international players who followed. Tony Cascarino, Niall Quinn, Paul McGrath – they are all responsible in part for Duff and Roy Keane and Shay Given.

For that reason there is a tone of regret that Ireland will not be in Russia, that when he sits down with Dunphy, Brady, Didi Hamann, Richie Sadlier, Keith Andrews, Given, Richard Dunne, Michael O’Neill and USA Women’s World Cup-winning goalkeeper Hope Solo, there will be more discussion about Iceland or Panama or even the Irish rugby team than the national football squad.

There is an awareness in Duff that Irish football does not currently possess a Johnny Sexton or equivalent. An Irish team has not qualified for the tournament since 2002, when Roy Keane left Saipan. Before that there was the simmering humidity of USA 1994 and Jack’s long game.

“Even though we got to the Euros, rugby for me has had more success for clubs and the national team,” says Duff.

“If you’re looking from an Irish sporting point of view, what are our successes? A kid is going to want to go out and play rugby, not football.

“They’re going to want to watch the Irish rugby team – the Grand Slam just gone – they’re not going to sit in and watch us against the USA or us against France. I hate to say it.”

It is, he knows, all about the creation of dreams, the encouragement of imagination. World Cups are about an Irish Baggio, a Romario or Messi from Mullaghmore.

And even the image of an unbreakable Keane walking his grateful Labrador Triggs past a phalanx of cameras without blinking is something, if only an image of defiance.

“The sideshow didn’t bother me,” says Duff of Keane and the Saipan walkout. “Myself, Robbie [Keane], Richie [Dunne], we were just young, fearless – we didn’t give a f*** what was going on.

It all begins on June 14th when Duff will be involved in a very different way.