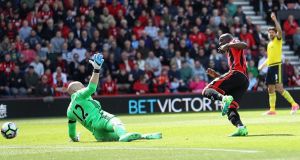 Benik Afobe is returning to Wolves as they begin what’s expected to be a busy summer in the transfer market. Photograph: Bryn Lennon/Getty Images

Wolves have completed a deal to re-sign Benik Afobe from Bournemouth, according to reports in the UK.

The striker has returned to Molineux for around £12million after the Premier League newboys triggered their option to sign him from the Cherries.

He scored six goals in 17 appearances for Wolves after re-joining on loan in January as the club won the Sky Bet Championship title.

The 25-year-old initially left Molineux for Bournemouth for £10million in 2016 having scored 22 goals 46 league games.

He managed 11 goals in 70 games for Eddie Howe’s side but struggled to pin down a regular spot, making just five league starts in the first half of the season before heading back to Molineux.

Afobe started his career at Arsenal but did not make an appearance for the Gunners.

Wolves also have the option of turning Diogo Jota’s loan from Porto into a permanent deal while Porto have claimed the Midlands club have activated their option to purchase Willy Boly for £10million.

Backed by the financial muscle of owners Fosun and their special relationship with super agent Jorge Mendes, Wolves are expected to invest heavily ahead of their Premier League return.