Graham Burke out of Shamrock Rovers’ clash with Dundalk 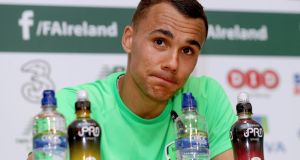 Graham Burke is to miss Shamrock Rovers’ league game against Dundalk on Friday evening after he was kept in Martin O’Neill’s squad for Saturday’s international against the USA.

But the 24 year-old says that the decision had nothing to do with him and that he would have been more than happy to feature for his club.

Shane Supple has been released back to Bohemians so that he can make the trip to Limerick before rejoining the Ireland squad ahead of Saturday evening’s game, but Burke will stay put with Martin O’Neill and Stephen Bradley apparently having agreed on how to proceed – something that might suggest the Dubliner will get more game time than the 20 minutes he featured for in Paris.

“I’m just focusing on training and enjoying being here with the team. That’s all I really know about it.”

Rovers are not obliged to release Burke and, given his importance to the side and its poor run of recent form, Bradley must have been reluctant to go into a game against the league leaders without him. But, in the end, the Rovers boss says he felt he had no option.

“We need him. But he has earned it. He’s gone in and done well. You don’t get what he got without doing well.

“You’d love to have him for us but you can’t deny someone an Irish international game. No chance. I’d never do that. I’m delighted for him but gutted he can’t play for us.”

Harry Arter, who O’Neill had said he hoped might be fit enough to start on Saturday is now a doubt for the game due to a thigh strain with the Bournemouth midfielder having had a scan on Thursday to determine the seriousness of the problem.

Derrick Williams also missed training with a groin strain but John O’Shea took a part in the morning session after arriving in for what will be his last game in an Ireland jersey, as did Jeff Hendrick, who missed the game in Paris with a lower back problem.