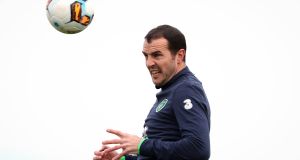 John O’Shea: vastly experienced defender has proven a stalwart for the Republic of Ireland over a long career. Photograph: Ryan Byrne/Inpho

John O’Shea’s senior international career may not have got off to the greatest of starts but Roy Keane says he saw something a little special in the Waterford man pretty much the first time he laid eyes on him.

O’Shea had already been at Manchester United two years and been out on two successful loan periods by the time Mick McCarthy threw him on for his debut late in a friendly against Croatia for the first of 117 senior caps.

The then 20-year-old promptly handled from a corner to concede a penalty from which the visitors got a late equaliser. It was an inauspicious start to what would be a great international career, one that will end on Saturday evening with the game against the USA.

“He’s had a good innings and you couldn’t begrudge him the nice send-off that he’s going to get,” says Keane who was a key member of the senior squad at United when the younger Irishman started to appear on its margins.

“I remember him as a young player and thinking: ‘this kid’s got a chance’. He was a decent player. And strangely enough, he always seemed really balanced. We’ve talked about all the pitfalls in football but John always seemed to be really switched on.

“But listen,” the Corkman continued with a grin, “he could be a raving lunatic when he’s at home in the evenings, I hope he is. I hope he’s a head case and we’re all proved wrong when he’s locked up in six months and we’re all saying ‘Jesus, I never saw that coming’.

“But I don’t think so. He’ll probably have a nice steady life. Probably become a coach or a pundit.”

A couple of the other established internationals to announce their retirement since the end of the World Cup qualifying campaign have also been asked along to Saturday’s game.

But the FAI has been fairly shamelessly selling the occasion as a send-off for a player, now 37, who first came to prominence as part of the U-17 side that won the European Championships in Scotland.

He played his second senior international game a few months after the 2002 World Cup, away to Greece. Keane was in international exile and McCarthy had recently resigned as a result of the pressure he came under when the team made a poor start to the Euro 2004 qualification campaign in the midfielder’s absence.

Over the years that followed, O’Shea became one of the side’s most important players; captaining the team on 17 occasions and featuring at two European Championships.

“Yeah, it’s a nice send-off for him and we’ll have good, good memories of Shaysie. He was a good pro, a good lad, and we’ll miss him, just like we miss Robbie and Shay and all of those guys but it’s all par for the course, you see these guys come and go.”

“John has been a key, key figure in our history,” said the 37-year-old. “What a servant and what a player he’s been over such a long, long period.”

“Was it 2009, the Champions League final? We were all in the hotel watching him playing at right back against Barcelona and he was coming in to us tomorrow or the next day.

“From playing at that level and then coming into an environment where he would be playing with Championship players, lower Premier League players . . . after playing the previous week with Paul Scholes or Roy Keane or David Beckham or whoever it was around that time, but there was just nothing ever big-time about him whatsoever.”

Racing continues at Level 5 while bookies have to close

Racing continues at Level 5 while bookies have to close 22:15
Jimenez makes the difference as Wolves see off Leeds 22:10
U20 hurling: Tipp and Cork book Munster semi-final spots 21:45
Dundalk boost European hopes with vital win in Derry 20:18
Princess Zoe primed for tilt at Prix-Royal Oak at Longchamp 20:04