Wolves defender says there’s no rancour, but he’s ready to step in for Georgia match 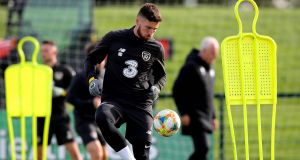 Sometimes it’s the silences that say most in player interviews . . . Then again, this is Matt Doherty, so scratch that. Still, the Wolves defender has just been asked how he would sum up his international career to date, and the 13-second pause, which includes at least one glance at an FAI press officer who may well be fearing the worst, seems instructive, at least until the Dubliner starts to talk again.

“Well,” he eventually says without any sense that he is about to provoke another one of those conversations with an angry manager, “I’ve not played that much, obviously, and I want to play as much as I can. How many caps have I got? Is it seven?” (It is.) “Four or five of them have been as subs. You want to play as much as you can. I don’t really know what to say.

“I have to bide my time, train well and still play well at club level and whenever my time comes to be more of a regular . . . but I’m just getting on with it. If I play, I play; if I don’t, I don’t, but then I will work harder to try get into the team.

“I wish I was [playing more], obviously, but international football is hard and it’s not easy to get into the team. I’m not frustrated or anything like that,” he insists. “I’m not annoyed with how it has gone.” (There is certainly no suggestion of rancour in his tone.) “I will just wait and when I’m called upon, I’ll be ready.”

Part of his particular problem, of course, has been having to compete with Séamus Coleman for the same slot, right back, something that might be expected to generate a bit of tension between the pair. As it happens, though, they are close friends and Stephen Hunt told recently of calling one and being put on speaker phone only to realise that the other was in the car too.

“We are probably the closest to each other, so that is true,” continues the 27-year-old, before adding: “it [Love Island] is not on at the moment so we’ve kind of been bored not knowing what to do.”

He seems genuinely perplexed that their friendship might be seen as strange in the circumstances. “It’s not strange at all,” he says, with a hint of exasperation. “It’s just totally normal. It’s not ‘I want to play’ or ‘You want to play’. Honestly, if you could see it you would think it is totally normal . . . and healthy.”

The issue doesn’t really arise this time, with Enda Stevens’s suspension having created a vacancy on the left side of Mick McCarthy’s defence, one that Doherty and Derrick Williams are both hoping to fill.

Doherty’s form for Wolves last year (a knee injury sustained in preseason has hindered him since the summer and he is, he feels, only getting back to where he should be) makes for a pretty strong case, and though Williams has played the position more recently, the Dubliner did a year and a half there too when Kenny Jackett was manager at the club.

“He started me around Christmas time and then I played there for the rest of the season,” he recalls, after having had to take a minute to rattle through all of the managers he has worked under at Wolves in order to pinpoint just which one it was. “Then I played like the whole of next season at left-back.”

In fact, he won the club’s Player of the Year award and caught Martin O’Neill’s eye while playing there.

“Yeah, it is different and positionally, defensively, it can be a bit tricky at the start. But I am professional and should be able to adapt pretty quickly.”

He says that this is the side of things that would most require some rapport with whoever is playing in front of him, most likely James McClean as both players need to instinctively understand who is their responsibility when the other side is attacking, but he does not sound as though he sees it as much of an issue.

“Going forward,” he suggests, on the other hand, “it’s great as you get to cut in and do one-twos. I guess you get to go down the line as well as everyone thinks you’re going to cut in, you use your talent and go do what you want.

My family and friends love when I’m here. I get to see them and they come to support the games

“It was really enjoyable,” he says, beaming, as he recalls that last spell playing there. “I was left-back when I first came into this squad, years ago.”

It is not at all a bad option for McCarthy to have, and Doherty sounds as if he more than ready to step in. And he seems surprised when it is put to him that he might prefer, as others have done, to focus on his club football at some point, if he keeps being overlooked.

“No, I couldn’t do that,” he says, with a shake of the head. “Each time you come in there is a chance that you might play, I guess. So no, I would never have that intention. Not just for me either because my family and friends love when I’m here. I get to see them and they come to support the games. No, that never, ever crossed my mind and hopefully it never does in the near future.”