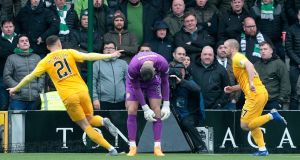 Ryan Christie was sent off as Celtic lost their first Ladbrokes Premiership game of the season at Livingston.

The midfielder was given a straight red card by referee Willie Collum in the 26th minute for a reckless challenge on Scott Robinson.

Robinson fired Livi ahead two minutes after the restart and striker Lyndon Dykes added a simple second in the 73rd minute for a shock 2-0 win, the Lions’ first every victory over Celtic.

A 1-1 draw at Hibernian last week was the first points dropped this season by the champions and they remain one ahead of Rangers, who can leapfrog them when they play Hamilton at Ibrox later in the day.

It was only the second defeat in 20 games for Celtic this campaign and they now have to wait until the end of the international break to make amends.

The visitors went into the game in confident mode.

Following the impressive 2-0 Europa League win over Romanian side Cluj at Parkhead on Thursday night, boss Neil Lennon made only one change with right-back Moritz Bauer replacing Hatem Elhamed.

Gary Holt’s side, who had lost their previous four matches, including three in the league, showed four alterations with goalkeeper Matija Sarkic, Jack McMillan, Keaghan Jacobs and Dykes back in the side.

The sodden artificial surface was proving to be a leveller and the home side, all hustle and bustle, came close in the 12th minute when defender Jon Guthrie side-footed a cut-back from Nicky Devlin past the post from six yards.

A flurry of activity at both ends saw Livi winger Steven Lawless test goalkeeper Fraser Forster with a low drive from outside the box before Sarkic parried an Odsonne Edouard drive wide for a corner which was headed over by Christopher Jullien.

The game’s complexion changed markedly when Christie went in high on Robinson in the middle of the pitch with Collum having no hesitancy in flashing red.

The champions’ response was to increase the tempo and moments later defender Kristoffer Ajer prodded the ball into the arms of Sarkic after breaking into the box.

Lawless knocked the ball from wide into Robbie Crawford just outside the box and when he slipped in Robinson, he quickly drove high past Forster from 16 yards.

With that stunning strike, the prospect of a shock Livi win was on the cards.

Lennon reshuffled with Ivorian striker Vakoun Issouf Bayo replacing James Forrest and the Hoops went all out for the leveller.

Sarkic made saves from Edouard and Mohamed Elyounoussi before Forster’s feet blocked an effort from Robinson in a Livi counter-attack.

Celtic’s pressure and corner count increased but one long free-kick from Sarkic went all the way through to Dykes, who ran past Jullien and calmly lobbed the ball over Forster for a victory which put an unlikely dent in the Hoops’ title hopes.