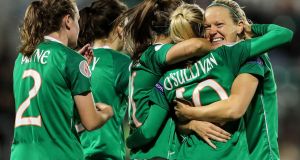 Not quite the full house Ireland were hoping for here and not quite the night anyone had expected but if he hung around long enough for a chat afterwards, Mick McCarthy was probably the first to provide reassurance to new women’s manager Vera Pauw that come the final whistle, it’s primarily about the points rather than the performance.

Pauw admitted afterwards that her players had almost thrown the game away but she got the win she wanted and suggested that the win might just have put Ireland on the road to automatic qualification.

“We almost gave it away,” she said. “You can see when the pressure is on us, the composure is lost. But we managed to re-set after the half-time.

“In the first half, we had them in our pocket and we just gave it away. But then I have seen this team fighting for a win in a way that I haven’t seen other teams do it. We will see how important this win is in the end and it means we may not even need play-offs.”

There is a long, long way to go between this and that being decided, however, and though the home side dominated for decent stretches, the new coach will be under no illusions about where improvements need to be made.

For the moment, she will prefer to focus on the positives, a win, one that confirms Ireland’s status as serious contenders for second spot in their group, and elements of the side’s attacking play, much of which was good.

Denise O’Sullivan had a big hand in a lot of the best stuff while Katie McCabe had her moments and Rianna Jarrett had a really fine night up front. The Wexford Youth striker got the goal her performance deserved and set up Ireland’s other two, one turned home by McCabe the other by helpless defender Natiya Pantsulaya.

McCabe’s, after 25 minutes, was the highlight of the night with Ireland breaking forward to great effect after having gotten themselves into, then out of, a sticky situation at the back. O’Sullivan’s ball into the space behind the right back for Jarrett was then the moment Ukraine looked to be in serious trouble, and the way the 25 year-old teed up her team mate was only narrowly bettered by the finish.

“We have been working on breaking really quick and getting those positions,” said the delighted striker afterwards. “I burst down the wing and Katie takes the space inside. I couldn’t have asked for better.”

That opening goal got what was still a record attendance of 5,328 going and when Jarrett turned home a corner by McCabe a couple of minutes later, it seemed the Irish players were going to give everyone who had sat at home despite having a ticket, cause to regret their call.

Things didn’t go at all to plan between that and half-time, however, with the home side defending a couple of set pieces, a free kick then a corner, about as poorly as you could imagine. Marie Hourihan’s handling error was the key element in the first with Megan Connolly’s hopefully miscued attempt to make what looked a simple clearance causing the problem for the second. In each instance, Ukraine scored with Lyubov Shmatko and Olha Ovdiychuk ultimately presented with straightforward finishes from close range.

Ireland’s third, eight minutes into the second period put the home side back in the driving seat but with just the one goal in it they never looked to be entirely in control of things against opponents who never looked as though they felt entirely out of them.

Still, they saw it through with Pauw suggesting that a pre-planned tactical reorganisation which included Niamh Fahey dropping into the defence helping them to survive Ukraine’s late push for an equaliser. “They finished the game with five strikers so it was just about keeping them away from the goal,” she said.

Australia rule out taking a knee against All Blacks 09:04
Irish duo set for AFL Grand Final as sport lifts the gloom Down Under 08:45
Barbarians match in doubt after 12 players go on unauthorised night out 08:07
Losing start for Dundalk in Europa League; How has golf become the bogey man? 07:40
Antrim offer to yield home advantage and play Waterford in Dundalk 06:52

1 Barbarians match in doubt after 12 players go on unauthorised night out
2 Colin Byrne: Hard to understand how golf has become the bogey man now
3 Irish duo set for AFL Grand Final as sport lifts the gloom Down Under
4 Jackie Tyrrell: Winter is here and a machine-gun Championship awaits
5 Fresh faces and renewed appetite: Is this a new era for Irish rugby?
Real news has value SUBSCRIBE
Crossword Get access to over 6,000 interactive crosswords