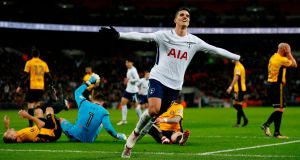 Mauricio Pochettino is sick and tired of being told he needs to win a trophy with Tottenham but the route to glory in the FA Cup appears to have opened up for him. This routine dismissal of League Two Newport County has set up a visit to Rochdale on Sunday week and, if his players can negotiate the treacherous surface at Spotland, they could find themselves in the quarter-finals.

Tottenham got past AFC Wimbledon in round three – a struggling League One club – while Rochdale are even further down that division. Pochettino would never admit it but he has to hear the sound of opportunity knocking.

Michael Flynn, the Newport manager, had said that a victory for his team would have been “the biggest result in the club’s history”. For context, Newport had won just one of their seven FA Cup ties away to top-flight opposition – against Huddersfield in 1949.

The upset was never on, despite County looking good in the opening exchanges. The gulf in class was clear and the only surprise was that Tottenham did not add to their 2-0 half-time lead, which was provided by Dan Butler’s own goal and a tidy Erik Lamela finish. It was the Argentinian’s first goal since a League Cup tie in September 2016. Pochettino’s team certainly had the chances but Fernando Llorente had mislaid his shooting boots and the crossbar denied the substitute, Dele Alli.

Newport had been eight minutes from victory in the original tie at Rodney Parade – Harry Kane’s equaliser saved Tottenham – but a Wembley replay was hardly a booby prize for them, particularly not their accountants. According to the most recent accounts, their annual turnover was £2.2 million. Thanks to this run, they have made £700,000.

They did not want it to end and, against a second-string Tottenham team – albeit one that featured plenty of international-level quality – they began brightly. Pochettino’s determination for his team to play out from the back is deeply ingrained but Flynn asked his players to press them high at the outset.

The tactic almost yielded a reward. Joss Labadie read Juan Foyth’s weak pass out to Victor Wanyama and he stepped in to win the ball. For a split-second, a run on goal appeared to open up for the Newport captain only for Wanyama to cut him down. The Tottenham midfielder was booked; the covering presence of Foyth spared him something worse.

Newport held their own for the opening quarter of the tie and it took a moment of misfortune to turn it against them. Moussa Sissoko’s low cross from the right was intended for Lamela, who had made a late break into the area, but it flicked off the defender Butler to deflect past the wrong-footed Joe Day.

Moments earlier, Danny Rose had sent a half-volley wide of the near post but, fortified by the own-goal, Tottenham pressed hard on to the front foot. Pochettino started Lamela in the No 10 role and he probed with menace while Heung-min Son caused problems with his pace and direct running off the left.

Lamela and Son worked Day in the same attack and Son dragged a shot wide of the near post. The second goal had been advertised. It came after another incision from Son. He collected Wanyama’s pass and picked out Lamela, who had bodies around him and plenty still to do.

His close control on the run was excellent, two touches creating the angle for the shot, and he guided it low and left-footed past Day. Wanyama needed to stretch into a saving challenge on Labadie in the 41st minute following Frank Nouble’s cross but the game felt over at the interval.

Since the original tie, Newport had lost at Lincoln City and Colchester United. It felt as though they had been saving everything for this tie and they left nothing out on the pitch. Tottenham hogged possession and made them work but they did not flag – even if a penny for their thoughts when Pochettino introduced Christian Eriksen and Alli as second-half substitutes would have been worth the investment.

It was an evening to forget for Llorente, who headed one glorious chance wide and volleyed another past the far post. Lamela was denied one-on-one by Day; Eriksen swiped narrowly wide and Alli, who was barracked by the 8,000 County fans, ran through only to hit the crossbar. At the very end, Pádraig Amond almost earned reward for the visitors only to be denied by Michel Vorm. – Guardian service