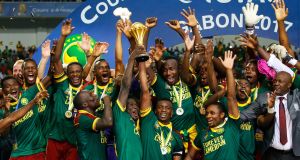 The worst Cameroon team in living memory. Or at least that’s what they were three and a half weeks ago, but the span of a tournament can be an awfully long time.

Eight players had withdrawn from the squad while the determination of their coach, Hugo Broos, to impose discipline had led to other established names being dropped. But his inexperienced squad showed remarkable tenacity to come from behind and beat Egypt to win Cameroon their fifth Cup of Nations title and their first for 15 years.

Mohamed Elneny had put Egypt ahead in the first-half but Nicolas Nkoulou levelled before a winner with three minutes to go from Vincent Aboubakar, a brilliant flick and volley, a winner for the ages.

After the semi-final success the great Cameroon striker of the ’80s and ’90s Roger Milla had spoken of the regret those who had chosen to focus on their club career would feel if Cameroon did go on to win the title.

So, Joël Matip, future generations will ask, what was the atmosphere like for that final in Libreville? “I don’t know: I was in Hull, losing 2-0.”

The atmosphere was fervent, Gabon’s large Cameroonian expat community turning out on force, joined by bus loads who had travelled south overnight from Douala and Yaounde. L’Amitié was full for the first time in the tournament and it was very, very noisy.

The expectation had been for a cagey game – Egypt had kept four clean sheets in getting to the final and Cameroon three with both prepared to play with extreme caution at times – but the play was progressive from the off.

Mohamed Salah had laid in Abdallah Said for an effort Fabrice Ondoa saved well low to his right when, with 22 minutes played, Egypt took the lead.

Salah was at the heart of it, exchanging passes with Amr Warda on the right before slipping a pass inside for Elneny.

The Arsenal midfielder had missed both the quarter-final and semi-final with a calf injury but, restored to the side, he took devastating advantage, clipping the ball in high to Ondoa’s left.

There are those conditioned, to regard any shot that goes in at the near post, who will blame Ondoa. But this was simply an excellent finish that took into account the goalkeeper was anticipating a cross.

If there were questions to be asked about goalkeeping, most of them were being raised at the other end. Essam El-Hadary broke the record for the longest unbeaten run in the Cup of Nations, and he made a stunning save from Herve Koffi in the shoot-out in the semi-final, but at 44 he is far from the commanding presence of a decade ago.

Two speculative Christian Bassogog shots from range early on suggested a shoot-on-sight policy from Cameroon, while there were a number of crosses that had the veteran drifting from his line and flailing.

That he has conceded only once in this tournament says more about the excellence of the Egyptian centre-backs, Ahmed Hegazy and Ali Gabr, than it does about his enduring quality. Age has very much withered him.

Sure enough it was a cross that brought the Cameroon equaliser just before the hour. The captain, Benjamin Moukandjo, who can at times seem a little wasted wide on the left, swept a ball to the back post where Nicolas Nkoulou, the former captain who had come off the bench for the injured Adolphe Teikeu, headed in.

They sat deep, they scrapped and spoiled and they sustained a predictably abnormal number of injuries.

At that El-Hadary remains a master: it’s remarkable that somebody with such a low pain threshold should have such a long career.

But they could not stop time forever. The winner came, and it was brilliant as Aboubakar took down a long ball from Sebastien Siani on his chest just outside the box, flicked it over Ali Gabr with his heel and lashed the volley into the corner.

The worst team in Cameroonian history? Other countries would be so lucky. The Lions are Indomitable again.

1 The Offload: Ireland are stuck in no man’s land
2 Nicky English: Galway and Waterford face battles with fatigue in All-Ireland semis
3 Every kind of wind imaginable was against Tipperary football - and they came through
4 Ken Early: Roles have reversed for Guardiola and Mourinho
5 Ireland’s loss set up by shambolic lineout and England’s supreme backrow
Real news has value SUBSCRIBE
Crossword Get access to over 6,000 interactive crosswords