Goalkeeper: ‘We’re the reigning champions and quite frankly it’s been terrible’ 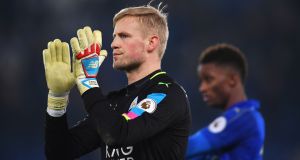 Kasper Schmeichel admits Leicester’s Premier League title defence has been “embarrassing” and believes his side are in serious danger of being relegated following defeat to Manchester United.

The Foxes, still without a goal in 2017, end the weekend a point above the drop zone after goals from Henrikh Mkhitaryan, Zlatan Ibrahimovic and Juan Mata gave United a comfortable 3-0 victory at the King Power Stadium.

Goalkeeper Schmeichel told Sky Sports: “It’s not good enough and it sums our season up at the moment.

“Let’s not talk about last season, last season’s gone, as you can clearly see.

“We need to stand up and be counted. This season from top to bottom hasn’t been good enough.

“It’s not a situation that’s comfortable at all. We’re the reigning champions and quite frankly it’s been terrible, it’s been embarrassing.

“We have to improve right now. It’s time for every single one of us, right from the top to the bottom of this club to stand up and be counted because if we don’t we’re going to end up getting relegated and nobody wants that.”

When asked about a supposed rift between some of Leicester’s players and manager Claudio Ranieri, Schmeichel added: “I’m not going to comment on any newspaper speculation. I know what’s going on in the dressing room.

“We’re a group of players who are low on confidence but certainly not low on fight. We’ll fight to the end, whatever that might be but I can guarantee every player in there is hurting.”