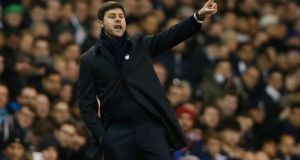 What must please Mauricio Pochettino, and what must worry Jürgen Klopp as Tottenham Hotspur prepare to visit Anfield on Saturday, is that there are more than four points between Spurs and Liverpool at the moment: there is also a credibility gap.

That Liverpool should be on the wrong side of that gap even though “Spursy”, denoting incorrigible flimsiness, is a longstanding entry in the English football lexicon, is a tribute to Pochettino’s redefinition of Tottenham since taking over two and half years ago.

“That opinion makes us very proud because I think Tottenham deserve that respect,” said Pochettino when it was put to him after Saturday’s gradual suppression of Middlesbrough – not his most spectacular feat but a significant one – that his team are now regarded as serious title challengers, not just for this season but for years to come.

“That motivates and inspires us to go forward and try to push on. I think we are building a very strong structure, a winning mentality, and I think it’s not just the players to speak well of, it’s the whole club.”

Pochettino had a head start on Klopp insofar as he has been in his role for more than a year longer than the German has been at Anfield, but, given the culture of flakiness that risked engulfing him when he walked into White Hart Lane, it still seems remarkable that he looks closer to building “a bastion of invincibility”, as Bill Shankly famously put it.

On one level it is daft to mention Shankly at this stage, but, on the other hand, one of the endearing things about Pochettino is that he is unafraid to bugle his grand ambition while – and this is the most important bit – putting together a powerful cavalry.

It was neither arrogance nor delusion that led to him declaring after the win over humble Middlesbrough that his aim is to make Tottenham one of the finest teams on the planet. It was a way of indoctrinating his players, girding them to fulfil their potential. He says they may not quite be there yet – the nine points separating them from Chelsea make that a statement of the obvious – but he is confident in the direction of travel.

“A few trophies, that would be perfect,” he said of medium-term plans. “But we can’t get ahead of ourselves. We need to be patient. We need time to try to create a strong team, a strong club, a strong mentality. A winning mentality, finish the new stadium. At that point we will be ready to fight like now but with more tools and to be one of the best teams in the world.”

The immediate task is to beat Liverpool in their next match and demonstrate why Spurs are ahead of Klopp’s team. Plainly it is because their foundations are more solid.

Spurs may sometimes lack precision in the opposing box – which is why their only goal in their last two matches, against Sunderland and Middlesbrough, was a penalty by Harry Kane – but they do not suffer from chronic malfunctions like Liverpool.

They can keep clean sheets and that helps keep their minds clear. How many defensive players – meaning here goalkeeper, defender or deep midfielders – would Liverpool contribute to a combined XI made up by the two clubs? Maybe Jordan Henderson or Joël Matip on a good day, but probably not.

Now come the caveats. For a start, Spurs will be without two of their first-choice defenders on Saturday because Danny Rose and Jan Vertonghen are injured. Ben Davies generally did well at left-back against Boro but looked uncomfortable on the few occasions that Adama Traoré ran at him, which was in a dazzling manner that Sadio Mané is capable of repeating time after time.

Then there is the fact that Liverpool tend to play better against top teams than they do against supposed inferiors – even in their recent goofy streak their best performances came in the draws against Manchester United and Chelsea and their last league win was against Manchester City at Anfield.

Spurs have not won away to a top-six team this season and their only two defeats of the campaign were at Old Trafford and Stamford Bridge.

And although Pochettino seems to be leading Spurs inexorably upward, having guided them to fifth- and third-place finishes in his first two seasons, and currently has them in second spot with five points more than they had at this stage last season, his young team need to do more to render “Spursy” an entirely antiquated term.

They say they have learned from their late loss of the plot in last season’s title race but they froze in this season’s Champions League when they looked like impostors at Wembley. At Anfield they will have a chance to stoke belief in themselves, and spread doubts about Klopp’s team.

1 Diego Maradona dies of heart attack, aged 60
2 Keith Duggan: Through the glories and the disgraces, we were all Maradona addicts
3 Darragh Ó Sé: Cork and Donegal went out with the wrong attitude
4 Gordon D'Arcy: I know what Joe and Cheika would do. Fix the basics
5 Andy Farrell to delve deeper into Irish squad for team to play Georgia
Real news has value SUBSCRIBE
Crossword Get access to over 6,000 interactive crosswords